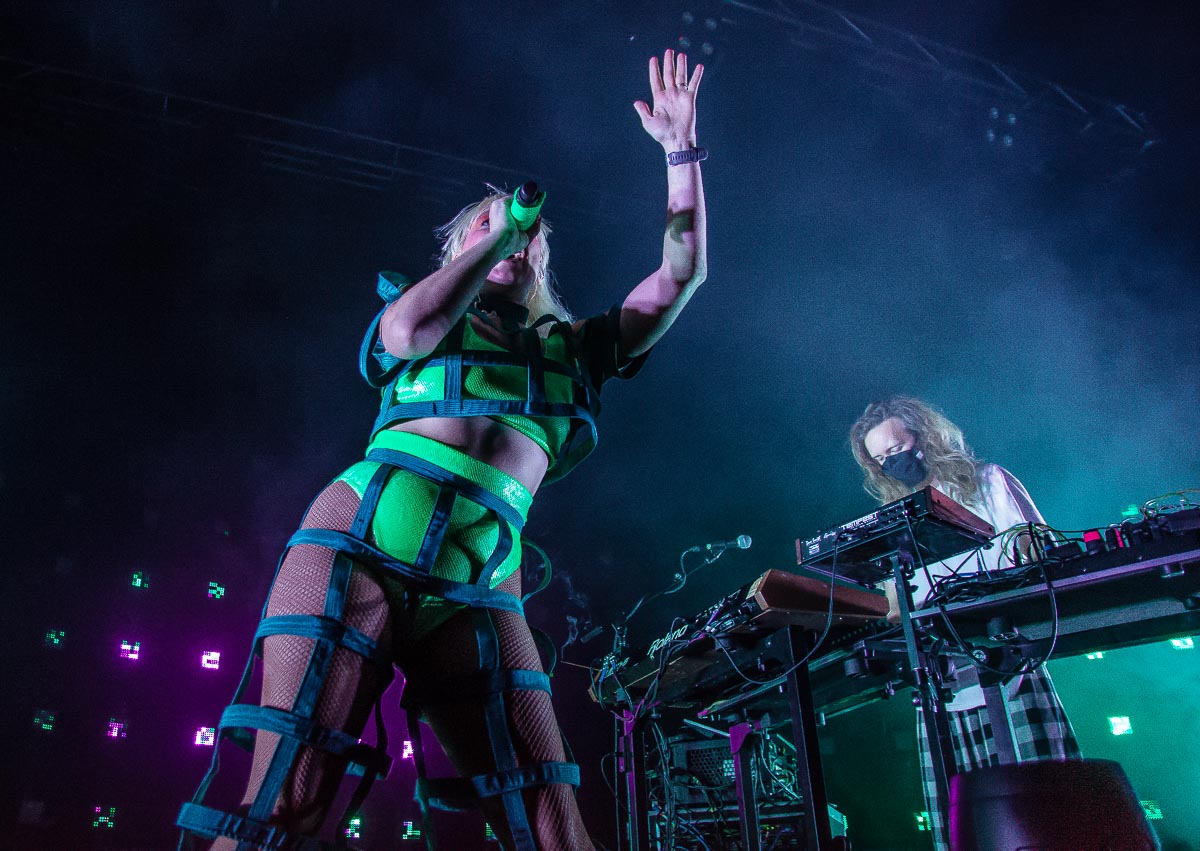 Sylvan Esso brought their Shaking Out The Numb Tour to Louisville, KY recently to a nearly sold out crowd!  Opening the show was Colombian-born and Toronto-based singer Lido Pimienta.  Blending traditional Indigenous and Afro-Colombian musical styles with contemporary synth-pop and electronic music, she had the crowd dancing in no time and laughing to her comedic banter between songs.  Early in her set, she told the crowd she was from Colombia but lives in Toronto, which is not as exciting, and asked if anyone in the crowd was from Colombia.  When no one spoke up, she jokingly said “Crickets”.  She then asked if anyone was from Nicaragua, where her percussionist was from, and then “Crickets”.  Finally, she asked if anyone was from Latin America and a few people clapped, to which she smiled and shook her head and said “Ok!”.  Blending her lyrical content with issues such as gender, politics, race, cultural identity, and activism, her music, while fun and upbeat, has important messages.  Singing a song called “Agua” early in her set, the lyrics talked about wanting clean water on colonized and indigenous lands.  She talked about worrying that her kids wouldn’t have water and having to pay $100 for a bottle of water, followed by “Oh wait.  That’s already happening.”  She talked about how happy she was to be back out on tour with Sylvan Esso and that she had toured with them in the past in Europe.  She ended her set with “Eos Que Tu Haces”, a song about the universal need to assert one’s humanity.  With a set full of fun, humor, and energy, she had people dancing and in high spirits for the evening ahead!

As the lights dimmed, signaling that Sylvan Esso was about to come out on stage, the crowd cheered and screamed in excitement.  Sylvan Esso is always a lot of fun live, putting so much heart and soul into their live performance, a deep love and appreciation for their fans shining through.  And being their first tour in about three years, this evening was especially exuberant for the fans.  Wearing a lime green two piece with a transparent strappy jumpsuit of sorts over it, Meath was all energy, singing many songs from the band’s 2020 album Free Love, such as “Numb”, “Ferris Wheel”, and “Rooftop Dancing”.  Throughout the set she never stopped moving, dancing and engaging the crowd, earning plenty of cheers and sing alongs.  Just as impressive as the high and infectious energy present on stage is the light show that one experiences at a Sylvan Esso concert.  With a kaleidoscope of colors gracing the stage, from bright and light shades of blue, white, yellow, and pink, to darker and more muted shades of green, blue, and red, it was an impressive show unto itself!  Towards the end of the set, Meath said that she had forgotten to talk during the set, as she had been having so much fun singing songs!  She went onto say how good it was to be on stage with everyone this evening and that  they would see everyone again soon!  Ending their set with “Play It Right”, they left the stage and came back out for three more songs, ending their set with “H.S.K.T.”, “Rewind”, and Make It Easy”.  It was a really fun night of music that left everyone buzzing long after the music stopped.