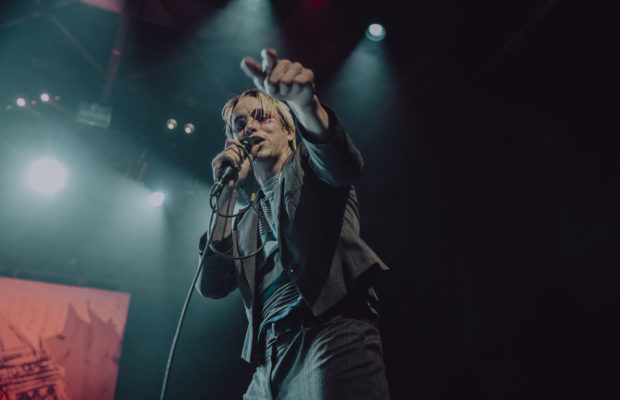 Too often in today’s society, bands are afraid to make a political statement with their music. It seems like the days of politically charged punk music are long gone, but not for SWMRS. Hailing from Oakland, California the punk rock band have created name for themselves and their politically charge indie rock, punk infused sounds. Last week, SWMRS brought their show to New York’s Brooklyn Steel with fellow Cali punks, Beach Goons.

Southern California surf rock trio, Beach Goons, opened the evening. Their highly energetic and angsty sounding songs riled the crowd up with circle pits galore spreading throughout the venue. Both the band and fans alike were ecstatic to be at the show and the level of enjoyment within the venue was nearly unbeatable. Beach Goons played a lengthy 40 minute set that featured their hit song “Reservoir Dawgs”, as well as newer songs like “A.M.” and “Vastos Tristes” from their debut album hoodratscumbags.

After a brief intermission for the crowd to catch their breath, it was time for the real party to start. The lights darkened and hoots and hollers erupted from the crowd. SWMRS took the stage, strapping their instruments on and taking their seats behind the drum kit. The band opened their fire fueled, highly energetic set with “Trashbag Baby”, the lead single off their most recent record Berkley’s On Fire.

SWMRS commanded the energy within Brooklyn Steel last night and the nearly sold out crowd was picking up everything the band was putting down. Two songs into the bands set, during “D’You Have A Car?”, lead vocalist/guitarist Cole Becker opened the pit up for a wall of death. The crowd split down the middle and ran at each other as the final chorus erupted and the thrill of the punk show took over. The band played a lengthy 16 song setlist, pausing in between songs to preach about safety at shows and for a tolerance against sexual abuse at shows. It was nice to see such a passionate band with such strong talent, be able to use their platform for the positive and to preach for those who are unable to sometimes.

Having seen SWMRS multiple times now, I have to say, the boys just keep getting bigger and better. Their performance energy and passion is extremely high and truly shines through when they are on stage. Their music and lyrics are just as much poignant and political as they are upbeat and fun to jam out to. I highly recommend everyone check out SWMRS if they have the opportunity!