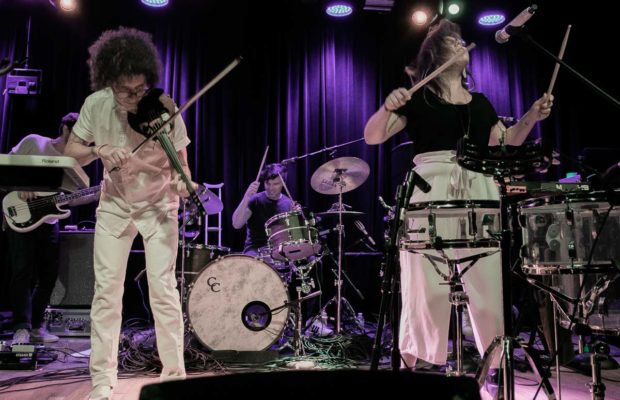 Hailing from New Orleans, LA, 6-piece indie rock band Sweet Crude, who are currently touring in support of their debut LP Creatures, stopped recently in Louisville, KY to perform for a modest crowd of fans.  Their music is a vibrant tribute to the sounds of New Orleans that embraces the region’s French-speaking traditions, with singers Alexis Marceaux and Sam Craft singing in both English and French.  The live show is a sight to behold!  From the moment the band came out onto the stage, they were full of energy and ready for a good time.  The main thing I noticed most as they performed each song was that the band was having fun.  Craft and Marceaux, who along with singing are also multi-instrumentalists, almost had a choreographed nature to their dancing.  They often danced with synchronized moves, with a very theatrical look to the routine that was incredibly fun to watch.  Before most of the songs, Craft would translate the meaning of a French song title or what the French lyrics meant in order to give the audience a better understanding of the song.  The crowd was having a great time, often dancing along themselves to each song, creating a wonderful energy throughout the room!  Sweet Crude succeeds in giving the sounds of New Orleans a modern and fun twist.  It was a wonderful night of music!  Nashville rock band Skyway Man opened the show.