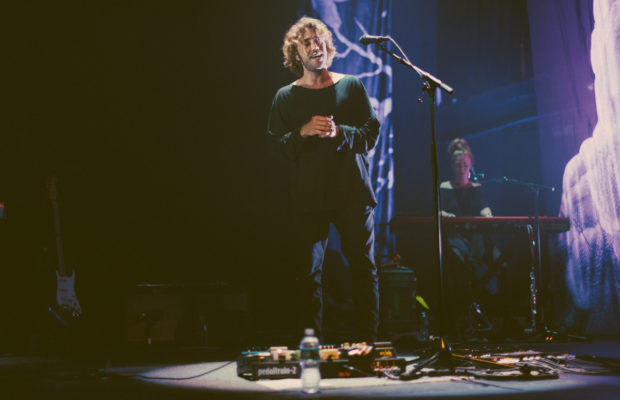 When Matt Corby takes the stage at Terminal 5 in NYC the screams that come from the crowd make me feel like I’m at a One Direction concert. Corby’s music has an ethereal tone to it, and anybody that appreciates music can admit that this man is talented. His fans range from teen girls who are as infatuated with his face as they are with his music, to grown adults. Standing in the crowd it’s hard to remember that you’re actually in New York since everybody surrounding me is Australian. Corby is from a small town in Australia and has been singing his whole life. When he was 16 years old he made a stint on Australia’s version of ‘American Idol’ and has been trying to get away from that image ever since.

Corby starts off the set with a song off his new album ‘Telluric’ and the crowd is ecstatic. Throughout the set Corby goes back and forth from not playing any instruments to playing the guitar, to even playing the flute during two songs. While he doesn’t interact much with the crowd, everybody is so drawn in by his voice that it doesn’t even matter that he doesn’t have much stage presence. Not very many artists sound better live than they do recorded, but Corby is definitely one of the few that absolutely blow you away by their raw talent in real life. His set lasts a bit over an hour, yet it feels so short because you know it’s going to end, but he makes you never want it to finish. When he leaves the stage before his encore the crowd let’s out a sigh in unison, knowing that this means their night is about to come to an end. He finishes his set up with two amazing tunes his own song, ‘Empires Attraction’ and a cover of the Sam Cooke song, ‘Change Is Gonna Come’.

Matt Corby just finished up his Telluric tour in Boston and as of now only has one Festival planned for the summer in Norway. Keep an eye out for what’s to come in his future. He’s a very talented artist and everybody should see him live at least once in their life.