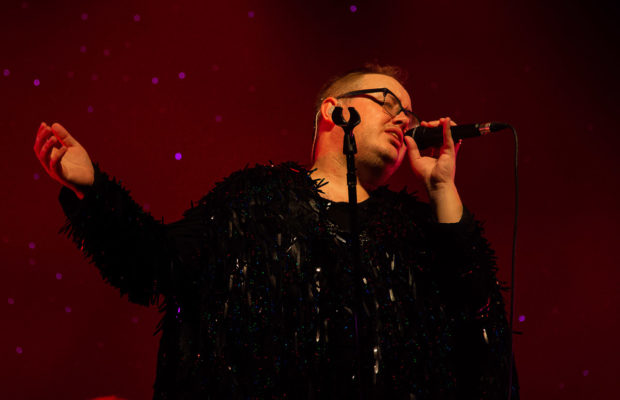 St Paul and The Broken Bones with Tyrone Cotton

Birmingham, AL rock ‘n roll soul band St Paul and The Broken Bones came through Louisville, KY recently, currently touring in support of their latest album Young Sick Camellia.  The venue was packed with fans who were ready to dance and sing and have a fun night, and as the band walked out onto the stage, the crowd roared with applause. With the entire band dressed nicely in suits, singer Paul Janeway came out wearing a long, sleeveless black sequined cape over his clothing and silver glittery shoes, his outfit reflecting his fun personality.  He made use of the entire stage as he sang, giving both sides of the crowd equal attention and often treating them to little dances throughout the night!  Starting things off with “LivWithOutU”, the band performed a nice variety of songs including “Flow With It (You Got Me Feeling Like)”, “Like A Mighty River” and “Apollo”.  A few songs in to the set, Janeway joked that the band apparently had a habit of coming to Louisville and performing at Iroquois Amphitheater every time they released an album, eliciting cheers from the crowd.  He then told the crowd that he was going to sing an older song, “Grass Is Greener”, his favorite song from the band’s first album.  The band proceeded to wow the audience as the evening progressed, with guitarist Browan Lollar, trumpet player Allen Branstetter, saxaphonist Amari Ansari and trombone player Chad Fisher each giving impressive solos on their instruments and showcasing their immense talents!  As the band performed their last song, “Bruised Fruit”, Janeway became very emotional towards the end.  The band exited the stage briefly, with the crowd restless with excitement for an encore, coming back out to perform four more songs.  Janeway told the crowd that “Bruised Fruit” is an interesting song, that he had been trying to make it through the song with each passing show without getting too emotional but had not succeeded so far.  He said he was sorry if he had made anyone in the audience sad and thanked the fans for being there and allowing the band to live their dream.  The band started out the encore with “Hurricanes”, with Janeway telling the crowd that it was a slower song and joked that if they didn’t know the words “For the love of God don’t sing”, which earned him a few laughs.  The band then performed “Half The City” and “Call Me” and ended the show with “Broken Bones & Pocket Change”, which saw Janeway step off of the stage and walk through the crowd while singing and interacting with the fans.  He made his way to the soundboard, where he stood and sang the last half of the song, and the fans were ready with their cell phones to record the special moment with photos and video.  It was a really fun night and the band gave their fans a really incredible show!  Local musician Tyrone Cotton and his band opened the show.