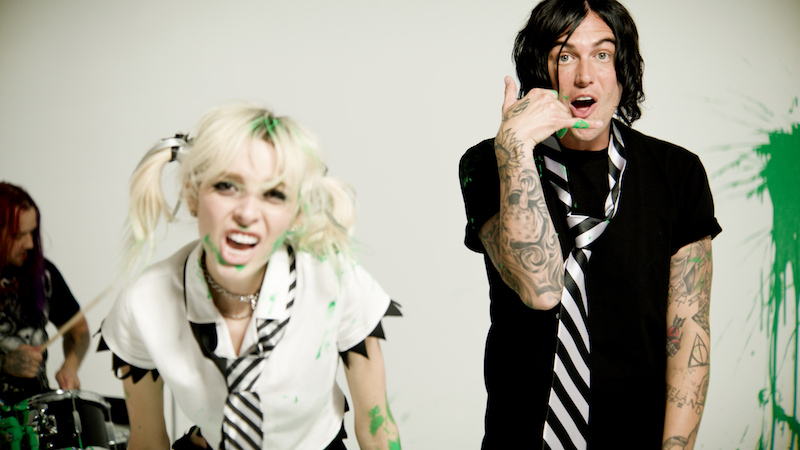 Rising teen pop-rocker Sophie Powers has released the music video for her recent single “1 Thing” featuring Kellin Quinn. The video features performance by Powers and Quinn and brings to life the various mental struggles Sophie experiences in her day to day life. On working with the Sleeping With Sirens vocalist, Sophie shares “It was also super cool to meet Kellin in person considering he’s someone I’ve always wanted to meet!!  I directed him and performed with him and I can say I totally get why he has such a good rep. He’s the nicest guy.”  Quinn continues by sharing, “I had a blast writing with Sophie Powers I think she’s an amazing talent a powerhouse! I hope you enjoy the song we did together!” “1 Thing” follows up Sophie’s debut single “Lonely Army”, which tackles the feeling of widespread loneliness that so many of us experienced during 2020’s seemingly endless lockdown, featuring powerful vocals that seem much more mature than Powers’ mere 16 years old. The first thing the listener notices is how strong her voice sounds against a single electric guitar riff. “Can you hear the feelings of the lonely?” she sings, describing a world that feels hopeless and stifling. Family is demanding and friends are unreliable.

At just 16 years old, Sophie Powers is the bold voice of a new generation. She understands the unique pressures of modern girlhood and uses her experience to write unfiltered, devil-may-care anthems about the ups and downs of being yourself. One minute she’s confident and cool, with the sneering attitude of a punk rock frontwoman, and the next she’s vulnerable and raw, channeling the loneliness of contemporary life in a stirring ballad.  In the midst of quarantine, she decamped to Los Angeles, living away from her parents for the first time in her life with a group of musicians. “In Toronto, I had my parents and friends constantly giving input and telling me what they think about my life. But in L.A. I was left alone with my thoughts. It got quiet.”  In that quiet, she understood her real goal: to express herself honestly. “Music was my outlet during some really dark times,” Powers says. “If I can be that outlet and help other kids navigate what I went through, that’s all I want as an artist.”  Combining the crunchy sound of punk with today’s hip-hop and pop, Sophie Powers is the unfiltered and uncompromising voice of a new generation. You can connect with Sophie Powers via the following links:
Facebook | Instagram | Twitter | Spotify | SoundCloud | iTunes/Apple Music | YouTube | Deezer | Tik Tok