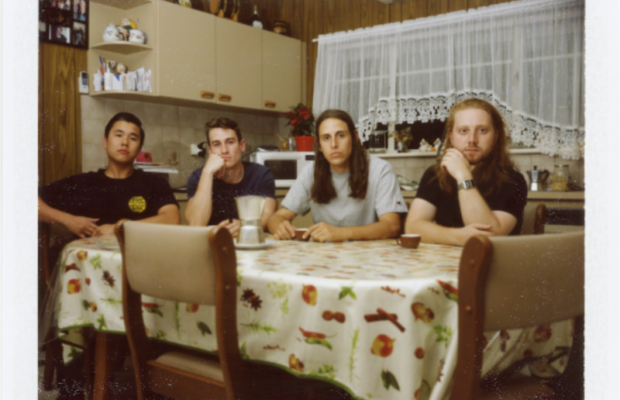 Slowly Slowly have shared “Smile Lines”, the latest single and music video off their new album St. Leonards. The band also announced a national headlining tour, set to kick off in Brisbane in November. You can watch the music video below:
The dark, haunting refrain of “Smile Lines” is captured through the lens of the character Garrod, whose sunny disposition masks a vulnerable and complex soul. Frontman Ben Stewart says of the track “We wrote the heavier sections as a band and had a lot of fun jumping around injecting it with energy. I sat with the quiet elements at home, trying to impart a conflicted narrative, which I felt would be an important backdrop to the more aggressive moments we had in the rehearsal room.” He continued, “Take what you want from the storyline, but for me the song centers around becoming entangled in your own web – the more you thrash around the worse it gets. Thomas Watson (Garrod) was incredible to work with and took us back and forth from stunned silence to roaring laughter over and over again in a very cold house one night in Brunswick.”
Following the release of St. Leonards in May, as well as an almost completely sold out Australian headline tour months in advance, Slowly Slowly are proving exactly why they were earmarked to be one of 2018’s breakout bands. You can view a full list of tour dates below and purchase your tickets here
Slowly Slowly Tour Dates
Nov 9 – Brisbane, AUS @ The Zoo
Nov 17 – Perth, AUS @ Jack Rabbit Slims
Nov 30 – Sydney, AUS @ The Lansdowne
Dec 1 – Wollongong, AUS @ Rad Bar
Dec 7 – Frankston, AUS @ Pelly Bar
Dec 14 – Melbourne, AUS @ 170 Russell