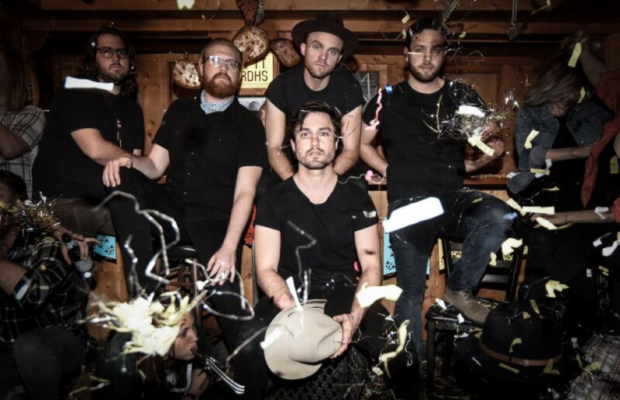 Indie-folk outfit Jared & The Mill have channeled the energy-charged emotion they funnel throughout everything they touch into their new video for “Break in the Ether”. You can watch the video here. The song reinforces Billboard Magazines notion that “Jared & The Mill often sing songs with messages of authenticity, open-mindedness and acknowledgement of others’ opinions, similar to this song, which acts as an ode to their fans of living up to their capabilities and being who they imagine themselves to be.” Comprised of five best friends, bonded together by spending (possibly too much) time on the road, there is something unabashedly and unapologetically straightforward about how the collective approaches their life in music. The band has built their career championing open-mindedness and celebrating other people’s differences.
Frontman Jared Kolesar spoke about the bands “family first” policy with fans by saying “The shows we put on bring people together in the most genuine way possible. Our message is one of acceptance. Not in a circle sitting kum-baya bullshit way…in a way of acknowledging that we all have shit we regret, we all have passions and opinions, and it’s up to all of us to filter through our flaws and our regrets to find ourselves. So don’t judge other people. Do your best to have a good time in life and care about everybody. Like… ‘everybody’ everybody.
This month, Jared & The Mill launched another off the beaten path road trip, weaving their passion for exploring, sightseeing and discovering the most distinctive locations in the unvisited corners of the towns they visit with an open-armed environment for old and new fans as the bring their full-tilt live set to 26 cities throughout through both coasts, the Midwest and Canada. Full dates can be seen below:
July 18 – Basalt, CO – Basalt Summer Concert Series
July 19 – Frisco, CO – Frisco Concerts in the Park
July 20 – Riverston, WY – Bar Ten
July 21 – Pinedale, WY – Wind River Mountain Festival
July 25 – Albuquerque, NM – Launchpad
July 27 – Austin, TX – Parish
July 28 – Dallas, TX – Trees Dallas
July 29 – Houston, TX – White Oak Music Hall
July 31 – Tampa, FL – Crowbar
August 1 – Orlando, FL – The Social
August 3 – Atlanta, GA – The Masquerade
August 4 – Nashville, TN – Mercy Lounge
August 5 – Charlotte, NC – Visulite Theatre
August 7 – Washington DC – U Street Music Hall
August 8 – Asbury Park, NJ – House of Independents
August 9 – New York, NY – Bowery Ballroom
August 14 – Toronto, CAN – Horseshoe Tavern
August 15 – Cleveland, OH – Grog Shop
August 16 – Detroit, MI – The Living Touch
August 17 – Chicago, IL – Lincoln Hall
August 18 – St. Louis, MO – The Duck Room
August 19 – Kansas City, MO – The Record Bar
August 21 – Denver, CO – Bluebird Theater
August 22 – Salt Lake City, UT – In The Venue
August 24 – San Francisco, CA – The Chapel
August 25 – Los Angeles, CA – Troubadour