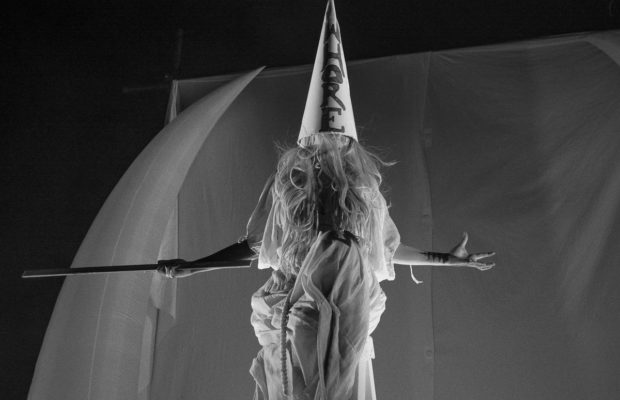 California metal band In This Moment, who is currently touring in support of their latest album Ritual, made a stop recently in Louisville, Ky on their Witching Hour Tour. The band has a very beautifully produced show, with props, masks, fog machines and beautiful lighting being utilized throughout the show. Singer Maria Brink is a dynamic front woman, showcasing her powerful voice and making multiple costume changes throughout the set to reflect the mood of each song. Guitarists Chris Howorth and Randy Weitzel and bassist Travis Johnson all wore a variety of face paint and masks, as well, making the whole show an amazing theatrical production. The entire band is incredibly grateful and appreciative of their fans, with plenty of crowd interaction and dialogue throughout their set. The band ended the evening with their hit song Whore from their album entitled Blood. For this song, Brink came onto the stage with a white robe that was tied at the waist with a rope and wore a white pointed dunce cap on which the word Whore written. Climbing onto a ladder at the center of the stage, Brink sang the song as she pointed a ruler in and knocked large, colorful balloons into the air. At the end of the song the entire band, which includes new drummer Kent Diimmel, came to the front of the stage, taking a bow and waving to the crowd. Brink shook the hands of the fans at the stage, thanking them for coming, as well as thanking the photographers for covering the show. It was a beautiful show and the fans were in high spirits as they exited the venue! Ded, New Years Day and P.O.D. opened the show.