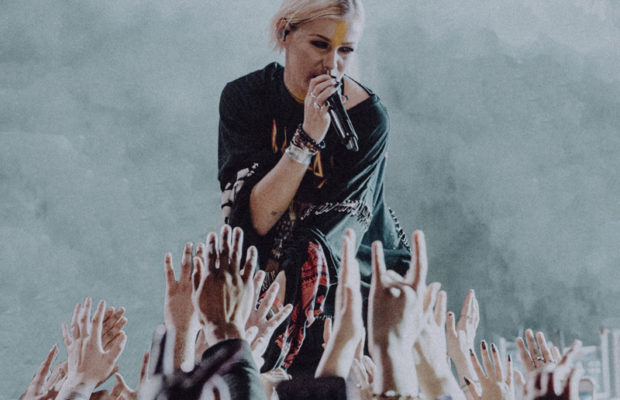 Silverstein and Tonight Alive with Broadside and Picturesque

There’s something about pop punk shows that I just never get tired of. Whether it’s the high energy and emotional performances from the band or the mosh pits and crowd surfing that happens from the audience. I still can’t put a finger on it, but whatever keeps me going was definitely inside New York City’s Irving Plaza on Wednesday night when Tonight Alive, Silverstein, Broadside and Picturesque brought the Get Free Tour to the big apple. I’m a pretty big fan of all of these bands so I was definitely amped to be seeing them all live on the same bill.

First up was Picturesque, the melodic rock band hailing from Lexington, Kentucky. While these guys are considered “newbies” to the pop punk scene, they hold a lot of potential. Having never seen them before, I wasn’t sure what to expect but man, did they captivate the audience. They were an insanely fun shoot and are a group of extremely talented guys. Despite their short set, they managed to pack in some fan favorites like “Waiting” and “Monstrous Things”. At the conclusion of their set, lead vocalist Kyle Hollis hopped down from the stage and climbed on the barricade. As he belted the final notes of the final song, he began to climb on top of the crowd and proceeded to walk on the hands of the fans below him. It was truly a sight to see and Picturesque set the bar pretty high for the night.

Although they’ve been through their fair share of lineup changes over the year, Broadside have always managed to put on a killer performance every time that I’ve seen them. Lead vocalist Oliver Baxter has a very commanding stage presence and it is always a real blast getting to watch them perform. Having just released their sophomore record Paradise last year, it was no surprise that Broadside’s set featured plenty of songs off that record including “Hidden Colors”, “Puzzle Pieces” and “Laps Around A Picture Frame”. However, they made sure to allot for fans who have been with them all along by playing their first ever song as a band, “Storyteller”, as well as “Coffee Talk”, which concluded their set.

While I wasn’t able to photograph Tonight Alive, watching them from afar was almost a better deal. Having just lost one of their guitarists late last year, many fans were worried about the bands performance standards. However, Tonight Alive blew those worries right out of the water as they graced the stage and started their set with “Book of Love”. While watching Tonight Alive perform, it is actually impossible to forget how much the band appreciates their fans. Lead vocalist, Jenna McDougall, paced the stage back forth for the span of the bands entire set, often leaning down to the fans in the front row. Tonight Alive had a lengthy set that featured 14 of their most popular songs including “How Does It Feel”, “Lonely Girl”, “Disappear” as well as the live debut of “Just for Now”. What was perhaps the most moving part of the bands performance was before the outro during “World Away”, when Jenna instructed the band to sing with her while she recorded it on her phone for the entire world of Instagram to see. For that moment, the entirety of Irving Plaza was singing along with her and it was a truly special experience. As if the performance couldn’t be anymore passionate, Jenna showed me I was wrong during their final song “Temple”, when she climbed over the barricade and into the crowd. She belted those last notes of the song while holding tightly onto the hans of those fans that were literally supporting her. It was a beautiful moment.

It was getting late — but not too late. Silverstein graced the stage 10pm and revved up the energy in the room from 60 to 1000. Without any introduction, the band leaped right into “Ghost”, off their recent record Dead Reflection. Silverstein are always one of my favorite bands to see because they are undeniably one of the most energetic bands in the scene. Lead vocalist Shane Told’s ability to switch between melodic singing and hardcore screaming is admirable and guitarist, Paul Marc Rousseau’s hair flips and groovy dance moves as he plays the guitar are the actual best. The majority of the bands hour long set came from their most recent album, but they managed to squeeze in a few songs from their previous albums including “Bleeds No More”, “Massachusetts”, and “Broken Stars”, before concluding their set with “The Afterglow”.

For many bands in the pop punk genre it can be hard to stand out amongst the sea of bands that are all trying to make it. However, I can confidently say (and I believe there are many who would agree with me), that each and every band on the Get Free tour’s roster is individual and unique in their own way as well as extremely talented and passionate about what they do. I highly advise every person who reads this review to catch any and all of these bands live when they are in your town because it will not be a show that you want to miss.