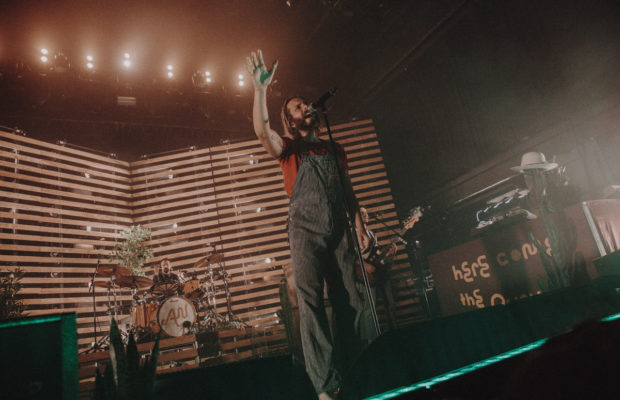 AWOLNATION with Nothing But Thieves and Irontom

A night of rock n’ roll was about to unfold at New York City’s Terminal 5. AWOLNATION was bringing their “Here Come The Runts” tour to the big apple and they were bringing along California-based band Irontom and British rockers Nothing But Thieves.

I first saw Irontom in a small club venue in New York City two years ago and I instantly knew that they had serious potential because of the way that they captivated the crowd. Lead singer, Harry Hayes, busted onto the stage as Irontom began their set with their hit single “More To Explore”. While the band did not get a very lengthy set, they managed to make the most of their brief time on stage. What I found most captivating, was the conclusion of their song “No Matter What”, which featured the longest guitar riff I’ve ever seen and drummer, Dylan Williams, ripping his shirt off as he stood up and smashed his cymbals, screaming into the air. Irontom left the stage and the crowd was buzzing, it was time for British rockers, Nothing But Thieves to take the stage.

Nothing But Thieves are no strangers to New York City, playing that same small club venue a few months ago, where I first saw Irontom. Unfortunately, I had missed the show and continued to long for the opportunity to see the band perform live. Finally that night had come on Thursday and the band definitely did not disappoint. What is perhaps my favorite part of Nothing But Thieves is the passion that shines through when they perform live, whether it is the facial gestures of guitarists Joe Langridge-Brown and Dom Craik or the insane set of pipes on lead singer, Conor Mason. NBT also did not have a very lengthy set but made sure to leave a mark on the audience by playing some of their fan favorites like “Sorry”, “Live Like Animals” and concluding their set with their undeniably catch hit single “Amsterdam”.

The night was far from over and everyone in the venue was buzzing as we inched closer and closer to the start of AWOLNATION’s set. Having just released their third studio album Here Come The Runts earlier this month, I was excited to see what their live performance would be like and they surely they did not disappoint. The band graced the stage and guitarist, Zach Irons, began shredding the opening of “Here Come The Runts” on his red multi-neck guitar. The energy began to rise as the pace of the song picked up and from behind the band’s overly large stage setup, lead vocalist Aaron Bruno began counting down. As the beat dropped, Bruno came flying out from behind the stage wearing a large hat and wearing a poncho that read “Here Come The Runts” on the back.

One thing that I have always loved about AWOLNATION, aside from their amazing music, is how beautiful and fun their live performance is. Watching from the back of the venue, the light show behind their performance was out of this world. AWOLNATION put on a lengthy but captivating set which featured songs from across their discography including “Hollow Moon (Bad Wolf), “Miracle Man” and they finished their performance with a three song encore including “Run”, “Burn it Down” and “Sail”.