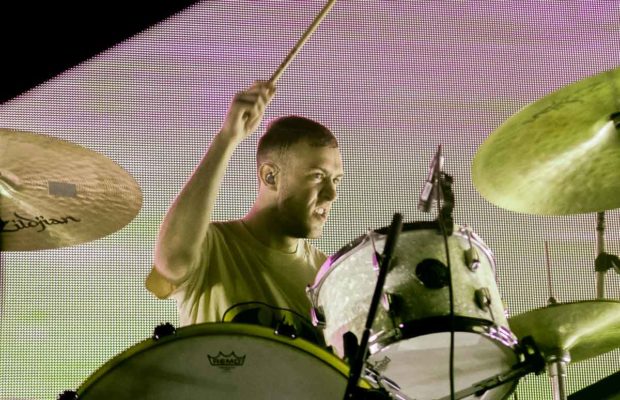 Coin with The Aces

Nashville indie pop band Coin, who is currently on tour in support of their latest album, made a stop in Louisville, Ky recently to perform to a sold out crowd of excited fans. Having gained widespread popularity since forming in 2012, a large line of fans were restlessly waiting for the doors to open in the hopes of securing a spot at the barricade. The venue filled up quickly, with the venue buzzing with a wonderful energy.
Opening the show this evening was the all female Utah indie pop band The Aces. The band was full of fun and energy from the moment they walked on stage, maintaining their upbeat energy throughout their set. Singer Cristal Ramirez has a wonderful voice and a zest for performing, dancing across the stage and interacting with her band mates for the entire set. It was apparent that the band adore their fans, with Ramirez chatting with the crowd between songs and walking along the front of the stage frequently to interact directly with the crowd, even shaking a few hands at one point. During their last song, Ramirez asked the crowd to jump, creating an energetic atmosphere to the end of their set. Although they are fairly new to the scene, The Aces had plenty of fans in the crowd this evening who were ecstatically singing and dancing along to every song. They definitely got the crowd warmed up for Coin’s set!
As the moment drew near for Coin to take the stage, the crowd started cheering and clapping, eager with anticipation. The stage was set up with an impressive lighting display which ran along the sides and front, with a screen set up behind the band that displayed a colorful and brightly lit backdrop for the band. As Coin took the stage, the fans threw their hands in the air and started screaming loudly, full of excitement. Singer Chase Lawrence is a dynamic front man, alternating throughout the set between dancing, playing his keyboard and interacting with the crowd. It is obvious that he loves to perform and has a great deal of fun on stage! The band played a nice mix of songs, including the hits “I Don’t Wanna Dance” and “Talk Too Much”, ending their set with the song “Feeling” from the new album. Coin is an incredibly fun and upbeat band that love their fans and put on an incredible live show. It was a great evening and the crowd left the venue buzzing with joy!