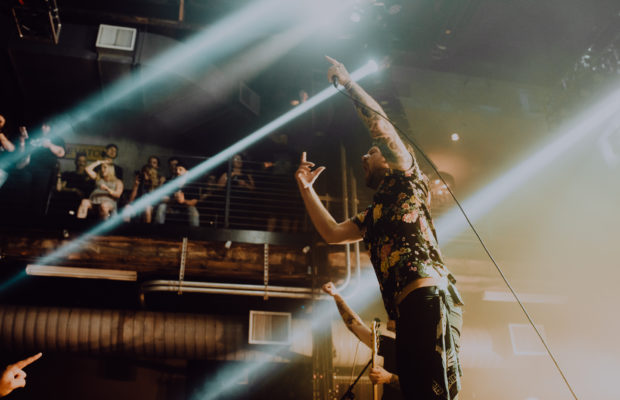 Beartooth brought their Disease tour through a sold out Mercury Ballroom in Louisville last week, bringing with them Dead American, Hands Like Houses, and Of Mice & Men.

Dead American started off the show with an incredible amount of energy. The five piece band, fronted by ex-Saosin vocalist Cove Reber, is currently supporting their album The Shape of Punk is Dead, with this tour being their largest to date. The San Diego based post hardcore rockers definitely made a lot of new fans that night.

Australian rock band Hands Like Houses came out next, amping up the crowd even more. Their fanbase has grown significantly over the last couple of years, and continues to grow even more; especially after their latest modern rock release Anon. The band’s excitement and vivacious energy filled the room, accompanied by Trenton Woodley’s soaring voice, and left the crowd ready for Of Mice & Men.

Any doubts about whether or not Of Mice & Men could carry on after losing both original vocalists have most definity ceased at this point. Lead vocalist Aaron Pauley has ditched the bass and in doing so has been unleashed. The metalcore group commanded the stage and crowd with Aaron at its helm and guitarist Alan Ashby’s powerhouse riffs right behind him. They played everything from their newest single Mushroom Cloud  to O.G. Loko. If the crowd was exhausted from moshing and crowd surfing, they didn’t show it.

Finally, it was time for Beartooth. The lights dimmed as Queen’s We Will Rock You played overhead. The Columbus based band stormed out on stage, opening with Bad Listener  which is a single off of their latest album Disease. Missing from the stage was lead guitarist Kamron Bradbury (who has been absent for most of the tour) and his place was the ever so talented Will Deely. However, Kamron did make a guest appearance towards the end of the set, coming out on stage to share a completely wholesome moment with vocalist Caleb Shomo. The rest of the set was filled with hits spanning their entire 3 album discography, along with a cover of T.N.T. originally by AC/DC. Their fusion of hardcore, punk, and metalcore has definitely given them an edge and made them stand out sonically, and their live performances only amplify what already makes them so great. Beartooth closed out the evening with In Between, with crowd singing as loud as possible, and exalting every ounce of energy they had left for that last moment. Everyone left feeling tired, but whole.

-Greatness or Death
-In Between