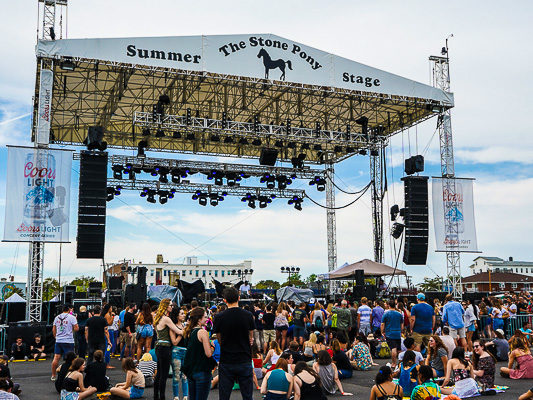 If you ever want to go to a day filled with amazing music be sure to attend Shadow of the City in Asbury Park, NJ at The Stone Pony Summerstage.

Shadow of the City was founded in 2015 by Jack Antonoff. New Jersey always gets a bad rap, but as someone who grew up there and knows there is so much more to the state than asking “what exit?” you live by, I was excited that Bleachers’ Jack Antonoff is shining a light on the music scene in a place that he frequented while growing up. In an interview with Rolling Stone about creating the festival he’s said: “So many people spend their time trying to get out of New Jersey then as soon as they do, they realize that it’s actually the greatest place to go on earth.”

This year they had a stacked line-up that brought fans from all over the U.S and beyond. The day was filled with performances by Ex Reyes, Clams Casino, Beach Slang, Turnover, Julien Baker, Hayley Kiyoko—a crowd favorite, and last but not least the stars of the night —Bleachers. Throughout the day there were also fun activities such as a dunk tank and Mario Kart tournament— both benefiting the Ally Coalition with the funds raised.

It was a wonderful Saturday filled with music and fun that you didn’t want to see end. I would definitely love to go again and look forward to see what they have in store for 2019.