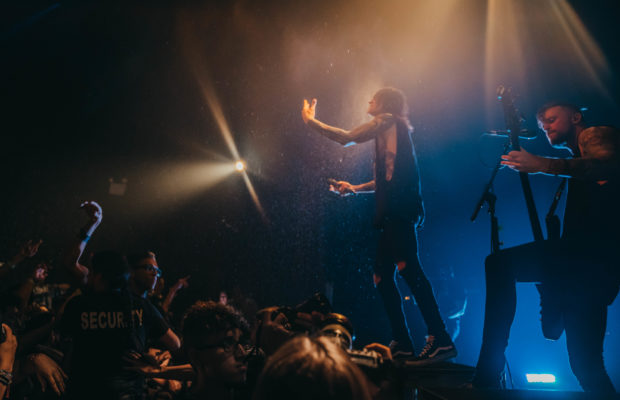 blessthefall with The Word Alive, DED, Thousand Below and A War Within

Day 14 of the Hard Feelings Tour brought the noise to a quiet corner of New York City’s Gramercy Theater: a small venue tucked tightly between a Smoke Shop and a Chipotle. The stage opened with a big sound from the Michigan natives A War Within. Their singing and screaming contrasted perfectly along with the acoustics built into the theater. They may have been an opener, but you wouldn’t be able to tell from their sound.

With hardly time enough time for the dedicated few to wipe the sweat from their brows did the next act, Thousand Below, start their set. The energy in the pit would fool the uninitiated into believing the San Diego band was only the second act. Their second song titled “Sinking me” caught my attention immediately. Vocally, I think this may be one of the best songs played that night. I am not going to lie, I added it to my Spotify playlist almost immediately. They definitely departed NYC with not only the experience, but with a couple hundred more fans.

DED hit the stage next. Sporting corpse-like contacts and a heavy sound, DED’s powerhouse setlist had the calmest fans stomping and throwing their horns into the air. I found myself in awe a couple of times, realizing that I have never seen them live. For anyone into this music scene, do yourself a favor and catch DED live. Their unique look and sound are far from forgettable. They are a perfect ingredient to this cross-country tour.

Anticipation filled the room as we got closer and closer to the main act of the night. The Word Alive came crashing into the theatre with the first song off of their newest album “Red Clouds” Towards the end of the set, Telle (vocalist)took a minute to dedicate the next song to recently deceased, Kyle Pavone. That sentence brought immediate sadness to the room, as just a couple weeks ago, we lost a very talented musician in the music scene. My heart goes out to We Came As Romans and Kyle’s family. As the crowd grieved it omitted an Aura of closeness and love. Every person in that room has one thing in common: Music. The Phoenix natives did not let that slip anyone’s mind. They turned up the tunes a little harder and faster, Sparking the first crowd surfer. All of a sudden the Gramercy theatre was a victim of the domino effect. There were more fans in the air than on the ground.

The stage crew quickly set up the last set of the night. Their banner went up and chills spiked down spines. Their artistic banner was glowing in beautiful bright colors and it was the perfect foreshadowing of the next 90 minutes. The first note struck and Blessthefall blew the house away with “Wishful Thinking”  as their first song. Following “Youngbloods” They threw it back to 2007 with their hit “Guys like you make us look bad.” Singer Beau Boken had a blast interacting with the crowd. He glided from the tips of  speaker to speaker to the beat of the music and sprayed his water bottle onto the dehydrated fans. The crowdsurfers were constant and the echoing voices continued.  I have not seen this talented Arizona band since Craig Mabbit was the vocalist, but I can say that their performance, talent, and passion for music surpassed by expectations with their new lineup. They closed the night with an encore, the song everyone seemed to be waiting for. “Hey Baby, Here’s That Song You Wanted” blared through the speakers and over 500 people sang along as if they were on the stage and no one else was in the room. I was truly blown away and may even try to catch another date on the tour.  I am almost positive that the metalheads in the city that never sleeps, produced and exhausted so much energy, that they finally caught some Z’s.