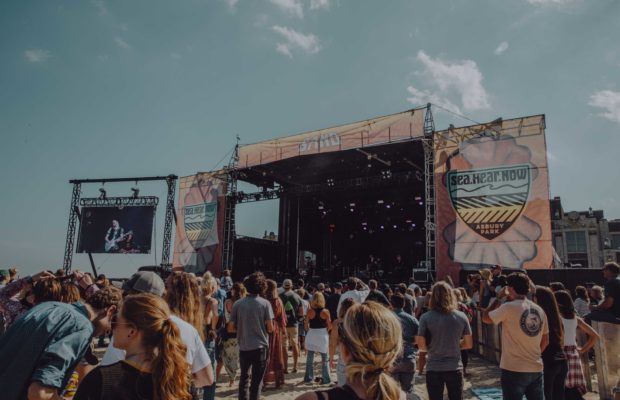 This past weekend, Central New Jersey’s premier beach town, Asbury Park, was converted from a summer getaway to the newest and sweetest music festival grounds. The inaugural Sea.Hear.Now Music Festival took over the Asbury Park boardwalk and Convention Hall on September 29-30 and surely did not disappoint.

The festival is a combination of art, music and surfing and was the brainchild of massive photographer Danny Clinch and surfing and musical legend, Jack Johnson. The duo wanted a festival that celebrated their loves for surfing, music and art and with the help of the masterminds behind C3 Presents (Austin City Limits, Shaky Festivals and Lollapalooza), the fest was brought to Asbury Park, New Jersey. The festival featured three stages, two stages right on the beach just feet from the oceans edge and one stage in the park behind the Asbury Park Convention Hall. Food vendors from both near and far including Asbury’s own MOGO Tacos as well as the Jersey staple, Playa Bowls arrived to feed the masses. New York City staples, Arancini Bros and Roberta’s Pizza also traveled to the beach to satisfy fans Italian food cravings. We can’t forget about the extensive line for the Chipotle food stand that never shortened the whole weekend. I was already looking forward to the festival, just from browsing the food options on Day 1 – before the music even started!

I arrived to the festival grounds on Day 1 boasting with excitement. I couldn’t want to see what was in store for this unique beachside festival and we couldn’t have had better weather for the fest. Saturday brought mid 70’s temperatures with bright sun, the perfect day for a music festival. I started off my day in the press lounge inside the beautiful Paramount Theater, with Frank Turner. We shot some portraits and talked about our favorite albums of the year before parting ways and venturing off onto the festival grounds to see what else was waiting for me. The instant I stepped foot on the boardwalk, music filled my ears. Everywhere I went there was music playing, I couldn’t escape it and I definitely didn’t want to. First up of the day was British reggae band, The English Beat, on the Sand Stage. With the male expression heat of surfing going on in the ocean just to my left and the band performing on the stage in front of me, I couldn’t have asked for a better visual. Across the beach there were multiple different art installations including jellyfish structures blowing in the wind next to a massive archway to the ocean that was constructed out of surfboards. I had never seen anything like it. It was beautiful.

The day carried on without a hitch, watching Blondie perform their hits “One Way or Another” and “Heart of Glass” while the sun set behind us. What was perhaps my favorite part of the festival were the constant drones that were flying above the festival grounds. The videos on the sides of the stage would alternate between the live performance and drone footage of the massive crowds on the beach with the sunset in the background. It was unreal.

And following the trend of mind blowing performances, Incubus headlined the first night of the fest, completely shutting down the Surf Stage with their killer performance. Fans got to hear hits like “Anna Molly” and “Drive”, the latter of the two was concluded with an A Capella sing a long from the crowd. Even thinking about it now gives me chills. It was a night I never want to forget.

On Day 1 we checked out: The English Beat, Highly Suspect, Frank Turner, Blondie, and Incubus.

I arrived at the festival for Day 2 bright and early. Today was a big day with The Front Bottoms, Social Distortion and Jack Johnson all set to perform within a matter of hours. I started my day off with Deal Casino, an indie pop band that is local to the Asbury Park neighborhood. They opened the festival with their high energy and catchy tunes and not to mention, they are hands down some of the best and funniest guys I have ever met. We spent the afternoon together for a portrait session and discussion of how all of their first concerts were at the old Giants stadium – just a matter of years apart – what a small world!

The afternoon into the early evening was a stacked lineup as I was caught running back and forth through the sand from the Surf Stage to the Sand Stage and back. The Menzingers, of Philadelphia, put on a killer performance that catered more towards the younger fans of the festival before heading to Kaleo to indulge in some soulful slow tunes. By 6pm, the Sand Stage and boardwalk area surrounding it were packed to the brim. Fans really turned out and blew everyone away with the crowd size – seriously, it reached all the way back to the Surf Stage. We were all counting down the minutes until the highly anticipated hometown band, The Front Bottoms would take the stage. Fans young and old hooted and hollered and the band took the stage and danced in the sand as the sun set and sang along to fan favorites “Twin Size Mattress” and “Peach”, before the band concluded their insane set with the song “Ocean.”

As the night fell, fans got to dance their butts off in the sand to Milky Chance before getting their last remaining angst out with Social Distortion – who had a local legend as a surprise guest: Bruce Springsteen! The set was one for the book, definitely won’t forget that one any time soon. The final day of Sea.Hear.Now was concluding and the highly anticipated headliner, Jack Johnson was about to take the stage. Johnson commenced his set with an empowering and adrenaline pumping montage of insane surfing tricks that blasted onto the big screens for all 50,000+ people in attendance. The folk singer graced the stage and played songs from his lengthy discography that catered to fans of all ages including “Better Together” as well as his hit song from Curious George.

“Let me make one thing clear here. All of the love songs are for my wife and all of the break up songs are for my friends”, Jack said smiling. I had never seen him perform live before but let me tell you, if there’s any performer that sounds even better live than they do recorded, it’s Jack Johnson. His voice and stage presence were impeccable and I spent the night dancing with people in the crowd, swaying to the tune of “Banana Pancakes.” Sea.Hear.Now 2018 had come to an end and I don’t think a single festival attendee was ready to say goodbye to the last moments of summer.

Looking back, there are certain things that I would have changed about the festival including adding a third day, adding more food options to avoid lengthy lines and creating more exits and better lighting throughout the festival at night time. But, that being said, for the inaugural festival, Sea.Hear.Now went off without a hitch and really blew everyone away. It was a beautiful weekend with beautiful music and beautiful people. I truly cannot wait to see what 2019 has in store for Asbury Park.