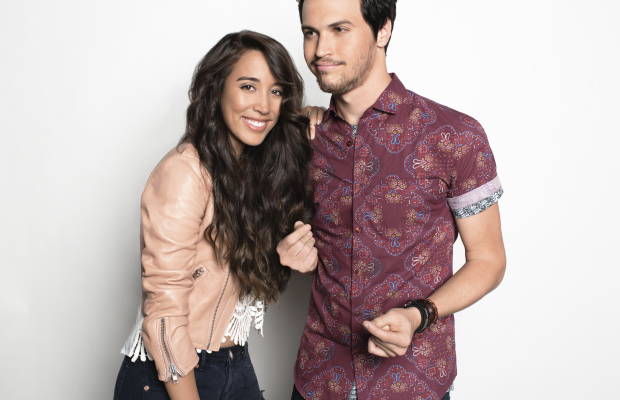 Stitched Sound’s Rachael Dowd recently caught up with X Factor winners Alex and Sierra to talk about their new album, All About Us, life after the X Factor and how they stay grounded in the industry. Read the full Q&A session below.

Stitched Sound: I remember watching your audition on the X Factor and being so drawn in by your singing ability as well as your personalities, as so many of us were. Are there any particular things you do to help you stay grounded since your run on the X Factor?

Alex and Sierra: Haha, well thank you! We go home a lot, and our families really like to make sure they knock us down a few pegs every time we’re home… keep us in check, ya know? But we also definitely keep checks on each other as well. It probably helps that we were both raised in Florida and basically grew up on the beach so we’ve got fairly laid back personalities. Life is gonna happen and we’d like to make our lives as positive as they can be.

SS: Do you remember one of the first times you were spotted by a fan and what happened?

A&S: Hmm…. The first time HAD to have been at The Grove in LA with a few of the other contestants from X Factor. We sort of lived at The Grove because none of us had cars and it was within walking distance. Everything that happened to us during the show is still sort of a blur, but we can remember hearing people start screaming and all of us kept looking around for someone awesome like Leonardo DiCaprio or something. Nope. Just some contestants on a singing tv show haha. It’s still very unexpected when people recognize us, but it’s also awesome to hear what they have to say in person.

SS:What was the hardest thing for you two on the X Factor and how did you overcome it?

A&S: The hardest thing was definitely just dealing with all of the responsibilities that you have, whether it’s learning 8 songs in a week or doing interviews for the TV aspect of the show, or just trying to get enough sleep. There was always a lot going on and time management was definitely a challenge. We just kept pushing through and trying to have fun. Another challenge was going from being a completely “anonymous” couple to the rest of the world to a singing couple that people wanted to analyze, scrutinize, and point out every small thing. Social media these days is harsh and it can be a lot to handle when your name is suddenly so accessible to internet trolls. It took a lot to overcome that, but we’ve realized that the types of people who spend their time sending hate to people making something of their lives behind a computer screen aren’t the types of people whose opinions should change how we feel about ourselves.

SS: You guys did all covers on the show – when you guys wrapped the X Factor, did you have a clear vision on where you wanted to take your music and career?

A&S: We didn’t really think that far ahead… we thought we might get a little bit of air time and someone important might see us and help us out or give us a chance in music. We never expected to win. So once we started writing the album we still didn’t really know where we wanted to go with everything. We would sort of just write a song, and then forget about it and start working on the next one and then after a while we had a pretty big repertoire to revisit. It was fun doing it that way because we got to write all different types of music and then see what worked well together.

SS: Congratulations on your new album reaching the number 8 spot on the Billboard charts! Where were you guys when you found out the news?

A&S: We believe we were somewhere in the midwest playing a show for Breast Cancer Awareness! It was SO exciting and absolutely shocking to see that we even made it to Billboard… a real dream come true.

SS: You both have a very strong musical style. Are there any artists you turn to for inspiration?

A&S: We definitely both have a few artists that we really look up to. As a group we really are inspired by Jason Mraz, The Beatles, John Mayer, Ed Sheeran, Fleetwood Mac…. the list could truly go on forever. We love so many different styles of music and can find something we love in just about anything.

SS: You both worked and wrote with a lot of different people on this album, what was one of your favorite moments during the writing process?

A&S: We actually got invited down to Jason Mraz’s house in February to write with him for two days… that was a pretty incredible experience. For him to welcome us with open arms and take us surfing and out to eat and stay in his home? Just insane. He’s someone that we both look up to immensely and to actually take part in his songwriting process first hand was incredibly inspiring… Not to mention he’s just an absolute stand up guy and someone we really respect.

SS: Are there any artists that you hope to work with in the future? If so, who?

A&S: We’d LOVE to be able to write and perform with Ed Sheeran. He’s SO talented and we really love his music. It’d be pretty awesome to be able to delve into his writing world as well and see how he works, as everyone has different methods.

SS: A lot of acts that come from shows such as the X Factor often get faced with scrutiny of being unauthentic. How important was it to you guys to co-write on the songs for this album?

A&S: We were really excited at the thought of writing our album. We couldn’t imagine standing on stages night after night singing songs we weren’t proud of or couldn’t stand behind or weren’t a part of creating. We wanted to make sure that the songs that came from our album were about us and the things that we cared about. We know, and the people in our cities know, that we spent a long time playing shows to nobody listening. We did things the “right” way and it wasn’t working so we took an opportunity to sing in front of some people that might be able to help us out. A lot of people forget the enormous stars who have come from television shows: Britney Spears, Beyonce, Justin Timberlake, Christina Aguilera, Usher, Keith Urban… and so many more. They have outgrown that scrutiny by being the best they can be so that’s what we aim to do. People can tell when something is fake or forced, so the easiest way to combat that is to be as authentic as possible!

SS: For those out there that haven’t heard your new album yet, what is one song they should listen to and why?

A&S: Our favorite song on the album is “All For You”. It’s this jazzy tune that really builds and gets super exciting as the song goes on. It was the first song we ever wrote together, and it really means a lot to us. But even if that song isn’t their cup of tea hopefully people can find at least one song that they really like! That’s all we really ask 🙂

SS: What do you guys do for downtime when you aren’t working to promote your new album, writing or playing shows?

A&S: We really like to spend time with our friends family. The most important people in the world to us are the people who know us and care about us most and it’s really wonderful that we get to be around them as much as we do. We also really like water sports (surfing, wake boarding, swimming) and finding new ways to spend the day with each other or with our friends. Groupon is really great for trying new things!

Stay connected with Alex and Sierra: