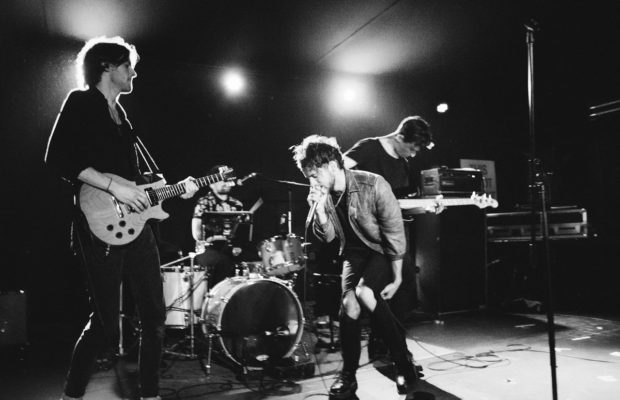 It’s already 9PM by the time I arrive at Mercury Lounge on the Lower East side of Manhattan to catch Canadian band, Romes, first show in Manhattan. I enter a venue so packed that I instantly forget that it’s a Monday night. The lads of Romes have been playing music together for quiet sometime, as they’re old school mates, but they have only been playing under that moniker or a bit over a year now, yet you would never know that from the crowd that has amassed. In fact, their debut EP, “Believe EP”, was only released on the 6th of April this year! The band has a very 80’s rock ‘n’ roll vibe mixed with some R&B beats and amazing pop hooks. The people in the crowd are drinking pints and chatting amongst themselves, the lads in the band keep hugging people they know in the crowd, then the lads leave the stage, the lights dim, and the crowd comes to a hush.

Vocalist, Jacob Alexander, drummer, Nicolas Amadeus, guitarist, James Tebbitt, and bassist, Andrew Keyes takes the stage to a raucous sound of applause and screaming from the crowd. They start the set with a song called “Can’t Get Enough”, that isn’t on their only EP, yet a large portion of the crowd know the words to the song. When they finish that song they go straight into their single, and EP title track, “Believe”. Alexander is the dictionary definition of a front man, he’s feeling the band’s music, and if the music wasn’t already making the crowd want to dance, his dance moves do the job. I’ve never seen a crowd react so quickly to a band’s music, but it only takes the crowd one song to get into the same mind space the band are in and begin to move along with the rhythm of the music.

Alexander isn’t the only member of Romes with amazing stage presence though, Amadeus, Tebbit and Keyes are demanding attention of their own with their moves and constant interaction. Tebbit may be one of the most enthusiastic drummers I’ve ever seen play, which is a great thing to watch. For a band with only four songs released to their name, they make their way through a ten-song set-list. The crowd’s response to the band only grows more energetic with every song, and it’s always at a high point when they do play songs from their EP. They close their set with their most listened to song on Spotify, “Tryna Be”, and the crowd loses it. Alexander is dancing as if he was born to be a boy-band front man, and the rest of the band is absolutely killing it. When they finish the set, you can tell that everybody in the room is upset it’s over, and just wants to listen and watch Romes play more songs.

Romes are going places, and I would high suggest getting on this bandwagon before they’re selling out arenas. While they don’t have any touring plans just yet, I’m sure you’ll be able to see the lads of Romes play in a city near you in the not too distant future.