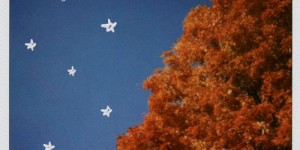 Pop punk band Love, Robot’s new EP Looking Down at the Stars is a breath of honest good music. We can bet that this is just the start of a million amazing things from these six Long Island kids.

The band delivers a clear message that they aren’t trying to be like anyone else. Love, Robot is light and yet strong with the first track on the EP “All the Walls” a fast love song about a taking things slow. Some things that I find interesting about Love, Robot is their vocalists, and the balance between them. Unlike many bands with both female and male vocalist where one voice is actually favored over the other or does one dominate. Love, Robot (also know as lovecommarobot) finds a lovely balance between their two vocalist Alexa San Roman and Jon Biegen, where it’s not a competition between the voices, but it’s more of a dependant relationship. During the song acoustic song on the album “Lighthouse” you need to hear both Biegen and San Roman singing to get the full feel. The song does not only have great vocals and beautiful music, but it delivers and honest lyrics that paint a nice image of a bright field and true love in your mind. The bands second single and second track off the EP “Things You Do” is a Pop Rock dream of a song with its an amazing sound delivered by the all three of the bands guitarest, Sean Murphy, Matt Clunie, and San Roman with a splash of tambourine. By the last two tracks “Melodies” and “Eleven, Eleven” you’re already in Love, with Love, Robot and they’re you’re new favorite band. All five tracks are completely worth the money and are perfectly written and produced. This is just the beginning of a long road for awesome things from Love, Robot.