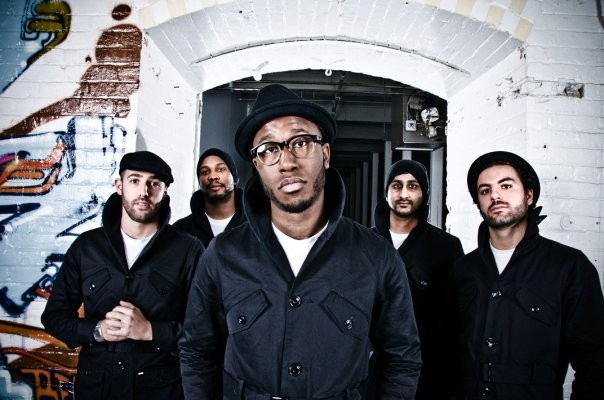 Would you be able to describe Bad Rabbits in one word?
Homogenized.

What makes Bad Rabbits different from other bands?
It’s hard for me to say that our music is TOTALLY different than everything out there right now. I have always thought that whatever you are doing at any point, that someone else is probably doing the same thing elsewhere. They just might not be at the forefront or approaching it/ marketing it the right way at a specific time. I think our aesthetic and our lifestyle/culture is really what sets us apart from other bands right now. We all come from completely different cultural backgrounds and 3 of us are first generation Americans playing in an “American Band.” We are also a band that can go from playing post rock/metal shows to playing hip hop/R&B shows and still gather a good amount of respect from each crowd in attendance. It’s the “American Dream” (haha) which is what Dua, our singer recently called us.

When you first started writing and making music, did you set out for a specific genre or age group? Why or why not?
We had some thoughts on how to keep it sonically cohesive as far as what kind of guitar, drum, synth and bass tones we wanted to use which were definitely heavily influenced by a time period of music that we are all obsessed with, which was the 90’s. R&B during that time period was so refreshing and was a huge influence on our sound. This combined with everyone’s personal taste as far as some people being into hip hop, hardcore and/or metal and some people into funk, punk and/or Soul, whatever. It was a challenge creating a cohesive sound that was easy for listeners to wrap their ears around but also creating a sound that makes listeners question what our influences are based on hearing the sound. This was at first though. Our style and sound has definitely broadened since then.

How would you describe Bad Rabbits’ writing process? Is it collaborative or not?
Yes, it is a collaborative effort. Everyone in the band has their strengths and weaknesses with songwriting, performing, and creating in general. Being a band for almost 10 years allows us to realize when one needs to take a step back or a step forward in certain situations and still contribute to the overall effort.

So you did a collab song with Travie Mccoy. What was this experience like?
We’ve known Travie for a while now and he has always been a friend and supporter of the band. His band Gym Class Heroes played a show with my other band: Irepress, a while back in Boston and ever since we kept in touch and supported each others careers. We had been talking about collaborating for years but it was being held back by scheduling and politics but eventually we worked it out. We actually weren’t in the studio with him when he recorded his verse on “Girl I’m Like Damn!” due to timing issues. He laid his verse down at STRESS the WhiteBoys studio in Pennsylvania and sent us his verse and we all agreed that he nailed it.

While playing a show, what do you like to see from the crowd?
I like to see all types of crowds. I like the crowds that get wild and mosh, crowd surf, scream, dance, whatever. But I also like playing to “staring crowds” that have their arms crossed and are clearly very skeptical of what they are seeing. It forces us work harder on our performance.

Have you done any crazy or embarrassing things during a show? What happened?
Dua’s ass usually hangs out during shows and since it’s so hard to miss, there is usually a butt crack sweat mark on his boxers that appears halfway through the set. That is pretty embarrassing. Me, personally. I always embarrass myself on and off stage. Can’t even keep track of that.

Do you have any plans for the rest of 2011?
Yes. We are putting the final touches on our new album that was produced by Teddy Riley. We started a “Live Covers session” series which we cover some of our favorite songs and video/audio record them in our rehearsal space. First song we did so far was “Sextape” by Deftones. We will be out with Travie McCoy in the spring as well as touring all summer.