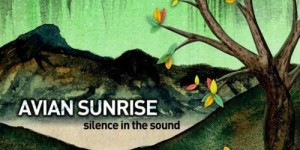 Most bands just try to sound nice or look good to make their way into the scene, but Avian Sunrise is genuinely unique. This is a band that wants to get through to their audience on a more personal level.

Coming from Sioux Falls, South Dakota, Avian Sunrise is a five-piece, piano-rock based band that composes music that captivates anyone who has ears. It sure did capture the audience of those who watch one of MTV’s hit reality series “The Real World: Las Vegas”, which featured two tracks (“What You Deserve” and “A Noisy World”) from the EP, released in April 2010, ‘A Noisy World’. It gained Avian Sunrise listeners and the exposure they deserved.

Along the course in the beginning of this year, they released their first full-length album entitled Silence in the Sound. This is definitely a new band to me and the moment I pressed the play button I knew I was not going to regret listening to them. Avian Sunrise has a similar sound to the infamous Death Cab for Cutie. They have a sound that soothes and occasionally can get louder from the notes on the piano to the catchy riffs of the guitar. Avian Sunrise definitely masters the art of music with their range of tunes and lyrics fused with Wehrkamp’s vocals. I stated earlier that Avian Sunrise is a band that wants to connect with their audience on a more personal level. They surely did see me at an eye-to-eye basis. The first track “Go” reeled me in with lyrics “Staring at the could have been / Nights that leave me wondering.” How many times in your life have you thought about of the ‘could have’, ‘would have’, ‘should have’ situations? For me, I believe this band has the potential to inspire others and I got that from the second track “Bravery” with the line, “How can you save yourself / When the enemy is you? / Put your guns on the shelf / And see this one through / Or you won’t know / How to get control”. Continuing on through the freshman album, the noise speeds up truly showing their colors and sounds in “All the Darkest Colors”. The track following after that slows down and dedicates itself more to the piano’s sweet melodies then eventually evening out until the end. All the while the sound of Avian Sunrise never played that one track that didn’t belong to the record.

To get the most of this album you truly have to listen to Silence in the Sound in its entirety. Avian Sunrise has talent and surely they’re on the verge of breaking out. Their music is true, understanding, has feeling, humility, and is most certainly refreshing.  You don’t need to be in a certain type of state or mood to listen to Avian Sunrise. This band will meet you there.