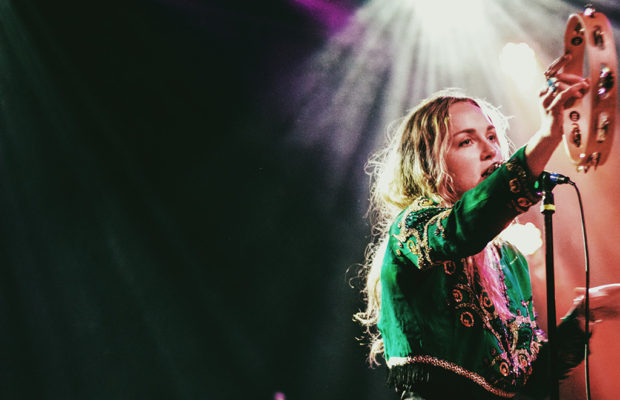 As the house music lowers and the lights dim, each member of the audience begins to paint a smile onto their face as they anticipate Zella Day taking the stage. Outside the walls of this Cambridge, Massachusetts venue it’s calm, quiet even. The college students are gone for the summer, it’s too cold for anyone to be taking a voluntary stroll down the one-way streets of Harvard Square. However, within The Sinclair the cheers for this soon-to-be pop princess ring louder than any instrument on stage could.

Zella Day is relatively new to music scene, having released her freshman record just last year. However this album, Kicker, and touring have already taken her thousands of miles from her Arizona home and into the hearts of many adoring fans.

Throughout her set she belts out the heartbreaking and ominous lyrics of “Hypnotic”, the soaring vocals of “1965” and “East of Eden”, and familiar words during her cover of “Seven Nation Army”. She even gave fans a glimpse of what’s to come by playing her newly released single “Mustang Kids” and her soon-to-be released song “Man on the Moon”.

Though her set began with the smiling faces of the audience, Zella returned the gesture throughout the entirety of the show. It is clear when an artist is proud of the work they are putting into the world; songs are filled with more passion, shows are filled with more energy, and at the end of the night every person walks out with enriched memories.

Zella Day continues her North American tour into the month of September.