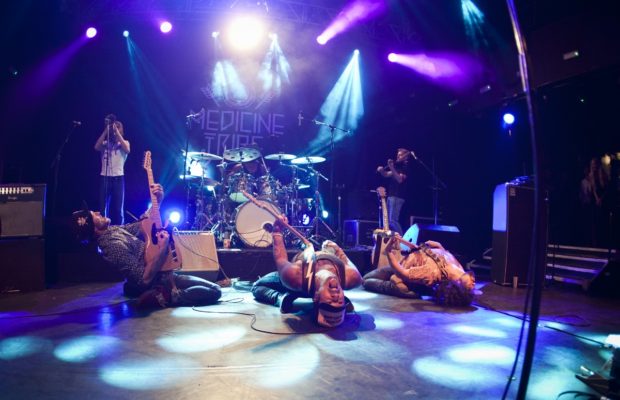 Nahko and Medicine for the People
KOKO | London
August 10th, 2016

With a personal heritage steeped in narrative and musical influences from across the globe, it’s no wonder that Oregon born Nahko Bear and his Medicine for the People drew a crowd of all nationalities, ages and appearances for their midweek London Show in Camden’s KOKO.

Rallying a global ‘medicine tribe’ on their HOKA: A Call to Action tour, Nahko and MFTP are on a mission to unite, inspire and make changes in an increasingly anxious world. A recognised movement in their home country, this was only the band’s third show within London’s borders and they were looking to grow their tribe.

The night began with the warm up Sound of the Sirens. Looking more like a female Flight of the Conchords than the mystical sea temptresses of their name, the foot-stomping femmes-de-folk provided an intimate and haunting introduction to the evening; combining folky influences with intricate vocal duets to create a sound much bigger than their humble stage presence.

Yet it wasn’t until Nahko appeared that the crowd really began to take note. Launching with the ritualistic “Directions”, the charismatically cheeky frontman began raising energy and connecting with audience almost instantly. “Take your time” he winks through “It Is Written”, another track from the new album, pre-empting the crowd’s much larger response to older tracks including “Aloha ke Akua”. The crowd eased into the playful energy of Nahko and his band and soon the barriers between the stage and crowd, and those within it, dissolved.

Combining humble western inspired melodies with big bold Latino influenced brass, rock and roll licks straight out of the 80s and spiritual gospel, Nahko’s music is as varied as his history. With each track the wave of energy in the venue intensified. Violinist Tim Snider’s heart wrenching introduction to “Great Spirit” particularly captured the crowd: a performance so simultaneously raw and personal yet polished and universal it was a sweet torture to witness.

The playfully political lyrics intensify throughout the show, culminating in the poignant poetry of a new track with the chant “Peace in America, Be Decent America” as a response to the recent police shootings and persistent racism in US media. It is with a humble grace and an ever present smile that Nahko and his band are able to address such big issues without sounding radical or frightening to casual listeners.

As the world increasingly reports on the violence, separation and fearful times we find ourselves living in, Nahko and MFTP provide a musical medicine as an antidote for anxious times.