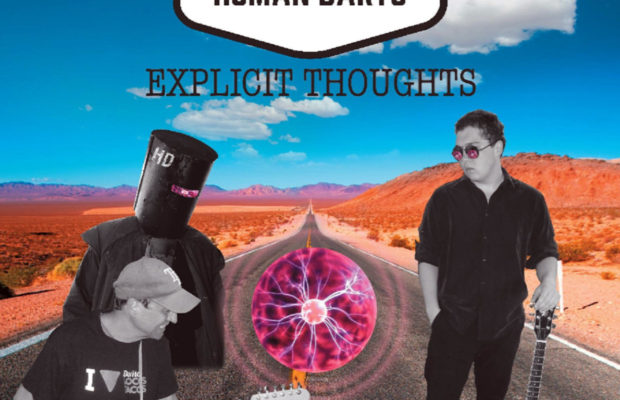 In the 1970’s, a punk rock band called The Human Darts released a record then disappeared. Since then, countless punk groups have covered their music and tried to capture the unique sound of that fateful record. Recently, one of the original producers, who calls himself Mr. Zelk, has recruited the son of one of the original members (Shane Close) and the original guitarist (John Arduser) to reform and bring the mysterious sounds to the modern era.

The band’s 4-track EP, Explicit Thoughts, sounds like someone made it in their garage, but that seems to the vibe the band is going for. Starting with “Stitches”, the simple percussion and slightly off-key vocals feel like a novelty but are hard to turn off. The band clearly has talent; the guitar riffs are cohesive and add a lot to the track. It’s difficult to pinpoint the band’s objective, however. Covering Hank Williams’ “Hey Good Lookin’”, the band picks up a little speed with a fun, rockabilly-style version of this classic song. The vocals sound a bit like Reverend Horton Heat, and the track showcases what the band is trying to achieve: rock n’ roll in its purest, most fun form.

“Zombie Man Chant” is the best track on the EP, combining funny and irreverent lyrics with organ-style synths and a rockabilly bass line. The EP’s final track, “Tell My Sister”, is Southern rockabilly with a chorus that sounds a bit like The Kinks or The Who in their early days. Again, it’s hard to figure out what the band wants from their music, but it’s an honest effort that doesn’t feel forced. While this EP is by no means polished, it kept my attention and left me wondering what else this strange, unknown group could accomplish in the future.

Stream the EP here and buy it here.