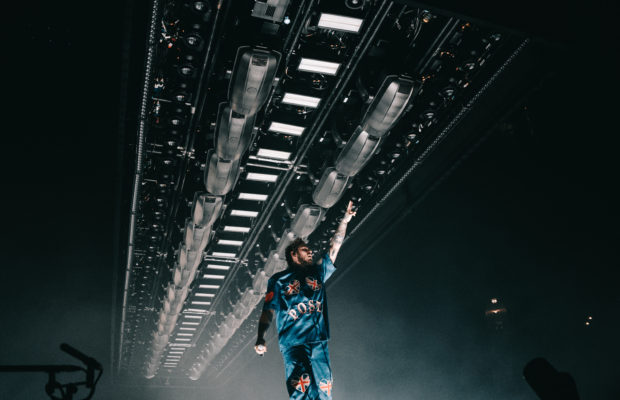 After following the career of Post Malone since the release of White Iverson in 2015 I was finally able to see the man live in a sold out show at the Manchester Arena and it did not dissapoint one bit! The now worldwide star brought all of his talents on his Europe/UK leg of the ‘Beerbongs & Bentleys’ tour including all of hit songs like ‘Rockstar’ and ‘Psycho’. Support for the night came from upcoming rappers Tyla Yaweh and Roddy Rich.

Tyla was the first act to greet the Manchester crowd and with the release of his newest project ‘Heart full of rage’ on the horizon he was clearly ready to show the crowd a good time. During Tyla’s fourth song the rapper would jump off stage into the photo pitt before standing atop of the barriers infront of those who had queued for hours to get front row, remarkably Tyla would then enter the middle of the floor in the arena with a security guard and continue performing the song surrounded by those in attendance! It was certaintly something I have never seen before at this venue and was a talking point throughout the night! Next to the stage was fellow rapper Roddy Rich who showed similar hpye to that of Tyla when performing his songs and clearly had some fans of his own in the venue as had many of the crowd reciting his songs word for word as his set continued.

As the clock struck 9 it was finally time for Austin ‘Post’ Malone to take to the stage, as fans awaited his entrance his lighting rig began to lift from the stage to the ‘broken whisky glass’ song and the room was full of screams of joy as he emerged from the smoke. It was one of the biggest reactions I have ever heard from being at gigs and the sold out arena continued with this energy as the night went on, fan favoruties like “Better Now” and “Candy Paint” would follow his entrance and were definitley a highlight of my night! Later on in the night Malone would go on to speak to the crowd and pull out a cigarette and as he did so he explained how he was told for every cigarette he smoked inside the venue it would cost him £3,000 and this certainly did not phase him one bit as he lit it up to a wave of applause. The night would end with an encore of ‘Congratulations’ and truly was a nigh that fans in attendance would not be forgetting anytime soon.