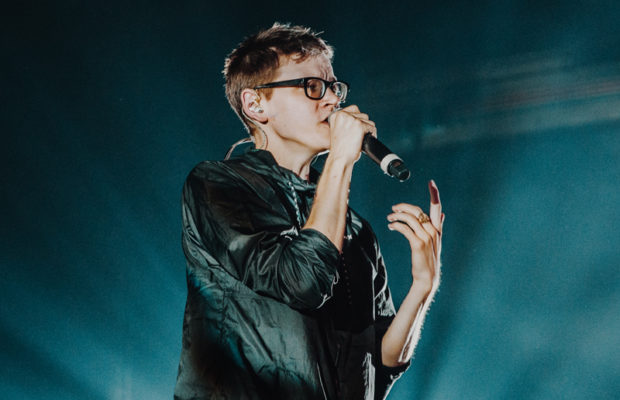 It was a quiet evening in Williamsburg’s Brooklyn Steel on Sunday night as people began to gather by the stage in anticipation for the Grammy award winning group RAC (it stands for Remix Artist Collective) performance.

LPX, commonly known as Lizzy Plapinger opened the night with a killer set full of high energy. While it was her first time playing Williamsburg’s newest venue, she made sure to set the stage on fire. Her hips swaying and hair flipping back and forth across the stage as she ran from edge to edge, extending down and screaming into the microphone as she connected with fans in the front rows. Honestly, it was impossible not to dance. While I’m only familiar with the music that has been released so far, the songs that she played during her set on Sunday night lead me to be very excited for what’s to come in her future. As her set began to wind down, Lizzy addressed some of her most dedicated fans in the crowd, who followed her from her former band MS MR, by playing one of their hit songs “Fantasy” before leaving the stage.

The stage transition was underway and the black sheets had come off the glowing cubes that lined the back of the stage. The center of the stage was framed with a keyboard and drumkit, with a bass on stage right and RAC’s notable guitar propped against the drum riser. The night was just beginning as the lights dimmed and the members graced the stage. They wasted no time as they elevated the energy from mid to high level with “Fever” followed by their mega hit “Hollywood”. After just four songs it was clear to me why RAC’s talent hasn’t gone unseen. Bouncing from one side of the stage to the other, each member of the band was interacting with crowd members making it a night to remember. They band played a lengthy 20 song setlist which included songs new and old and a few covers including ODESZA’s “Say My Name”. The band also played their hit “Cheap Sunglasses” as well as “Ready For It” and “Heartbreak Summer” before concluding their set with “Let Go”.

While the night may have started off slow, it certainly ended with a raging party that definitely took the cake for most fun had on a Sunday night.