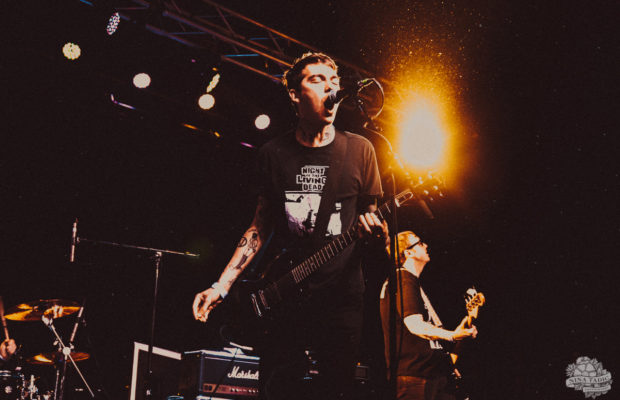 Concord Hall is set up with a wide open floor, and balconies on the left and right upstairs, so that patrons have a great view from anywhere in the room, and there is space to jump around and move as much as they would like. This made the venue perfect for Friday’s lineup.

The first performers of the night, Mannequin Pussy, may not have been well known at the beginning of their set, but definitely will be after it. The four-piece lo-fi punk group from Philly were definitely able to hold their own onstage. Between vocalist Marisa’s alternating crooning and shouting, she definitely captivated the audience’s attention for the duration of the set – at one point even speaking out about the crowd’s ability to have a voice in our government and speak out; willing us to call our congressperson immediately. Aside from Marisa’s fun and punky attitude, the rest of the band was fantastic as well. Bassist Bear, guitarist Thanasi, and drummer Kaleen all knew their pieces back and forth, jamming from beginning to end with a combination of quick-paced rhythms and sweet melodies.

Following Mannequin Pussy was folk-punk band AJJ. These Phoenix natives have always been known for their lyrics which focus on political and social issues, along with life in general. However, they are also known for having quite a bit of fun onstage and with the crowd. With bouncy keyboard and guitar melodies, AJJ managed to get the entire audience bouncing, dancing, and singing along with every lyric, rhythm, and melody they performed. The concert itself, for the span of their performance, seemed to go from a concert to a vibrant dance party more than anything else. AJJ knew how to fill everyone with energy just in time for Joyce Manor’s set.

Finally, the band everyone was anticipating was about to go on. The crowd was buzzing so loudly no one in the room could hear one another. Then, the lights were cut, the band emerged onto the stage, and the cheers were wild. The band immediately jumped into fan favorite, “Catalina Fight Song,” and the crowd yelled the lyrics so loudly that vocalist Barry Johnson was almost inaudible. Jumping and dancing, the audience was so full of life they were shaking the floor of the venue.

This kept up not only for the first few songs, but the entire set. Joyce Manor played a good mix of songs off each of their releases, from their most recent, Cody, to their oldest album, their self-titled. The band’s great sense of banter onstage further put the crowd in a good mood, especially when they joked about performing the song “Heart Tattoo” twice in a row. Joyce Manor has always been a band that knows how to get people excited, and this still rings true. The crowd lit up, crowd surfing, dancing, and singing from beginning to end. Joyce Manor definitely put on one of their most memorable performances yet.