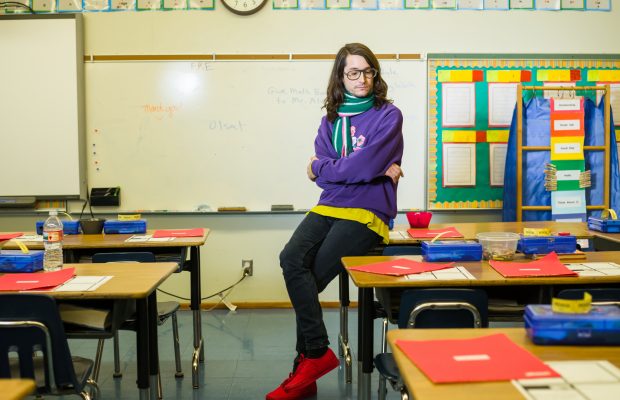 Patrick Morris, formerly of the popular indie pop/electronic band STRFKR and disco-rock band STRENGTH, has recently embarked on a solo career that is already generating a buzz.  With a mix of synth-pop, electro-funk and alternative rock, his music will no doubt catch the ears of STRFKR fans.  Having left STRFKR in 2014 in order to create his own music and have more over control over the creative process, he has been slowly creating a collection of songs that will be released this fall on his debut album Light Years Later.  Although he finished writing and recording the album in LA, he moved shortly after to Norway, his wife’s home country, and faced the challenge of having the album mixed by his friend and mixing engineer Rian O’Connell Lewis once he was in Oslo.  The end product is one that Morris says will blend electro-funk and power pop.  He has released two singles from the upcoming album, “I’ve Been Cleaning Up Your Room”, which has more of a power pop sound and “Hard Conversation”, which has more on a synth-pop sound along the lines of Daft Punk.  With plans for a second album already in the works, he plans to play some shows around the release of his debut album later this year.  You can follow Class Photo and stay up-to-date with all upcoming band news, album news and tour dates, as well as stream his recent singles, via the following links.  Check out “Hard Conversation” below.

You were previously part of STRFKR but felt the need to create your own project and write songs that reflected your own message.  You have mentioned that when you left STRFKR, that you struggled to make your own music and took a little break from it.  What do you feel caused your “creative block” and what was your process/journey like in finding that inspiration again to start writing your own songs?

It’s true I felt a ‘creative block’ with music, but actually I switched gears and started making paintings again. I felt more confident in painting at that time (I have a degree in painting/drawing). My Dad getting sick and dying was probably the reason I struggled to write new music. I felt, after I left the bands where I was in the background playing guitar and keyboards etc, overwhelmed when I took up a microphone, when I started writing lyrics, and so on. So I made a series of paintings which I called ‘In Lieu of Flowers’.

You’ve said that having total control over your music wasn’t exactly how you thought it would be and that it was a lot more difficult.  What did you think it would be like versus the reality of it?  What lessons have you learned about yourself in the process?

The main thing I found out after leaving STRFKR, was that I really DO need to work with other people in order to fully realize my musical ideas. Of course it’s nice to have more control, but I am a bit of a control freak and sometimes I get lost in the details, things that are not going to matter in the final mix. It’s great working with other people because they can help guide you and point out things that would’ve been lost. So, I ended up working together with several talented people, including Rian O’Connell Lewis, my longtime friend who mixed the album, and several others.

You have moved from the west coast to your wife’s home country of Norway.   Do you find that Norway inspires your music/songwriting in ways that the west coast, or US in general, did not?  What do you love the most about living in Norway?

My wife knows more Norwegian music than me of course, so she’s shared some interesting stuff with me over the years. Todd Terje, Bjørn Torske, Jaako Eino Kalevi (actually he’s Finnish), Susanne Sundfør and Band of Gold, to name a few. Band of Gold is actually signed to the label who will be putting out Class Photo’s record and I saw them play in Oslo when I first moved here. The label is Jansen Records, and I’m finding more and more cool bands through that label too. It feels great being in such excellent company.

You are planning to release your debut solo album Light Years Later this fall.  I read that you started writing and recording it in LA and finished it in Oslo.  What was it like for you to start making the album in one country and finish it in another?  Do you feel that your move changed the process/sound of the album in any significant way?  What can people expect from the album?

The process of moving from your home country to another continent is quite elaborate, so I know it affected the album. I originally intended to be finished with the whole thing before I moved, but that just wasn’t realistic. Then I realized if I was going to actually move to Norway I HAD TO finish writing/ recording a couple months before I moved. I made a second, hard deadline after that first one passed… Rian O’Connell Lewis, who is a phenomenal mixing engineer as well as guitarist/lap steel player, mixed it while I was living in Oslo. We sent notes and song files remotely, and, working that way, I had to step back and really trust him. This led to a more interesting, cohesive record I simply couldn’t have done otherwise.  The songs on the album ride the line between danceable, electro-funk and being somewhat more grunge, power pop.

The album seems to touch on some personal things for you, with the recent single “Hard Conversation” dealing with the death of his parents.  Do you feel that writing is a form of therapy for you in a way?

While it was therapeutic to write about personal topics, including the death of my parents and other types of loss, I don’t write music as a means for therapy. Don’t get me wrong though, art can be a great way to process emotions, and I believe clinical therapy is great for processing grief and other big feelings. Lyrics are often the last component of the song-writing process for me, and I often write many extra lyrics before I come to something that sticks.

While most of the album was self-recorded and has a very DIY aesthetic, you did collaborate with a couple of friends including Billy Delelles on percussion and actress/artist Jacqueline Kim.  What led you to feature your friends on the album?  What do you feel they added to the process?

They are good friends, and they added a certain ‘sauce’ that I felt was missing. I liked stepping into the role of engineer/ producer for capturing their performances too. Jacqueline gave a passionate performance on “Foreign Pictures” and Billy, who does percussion, lent some outstanding performances I used throughout the record. My wife also sings lead vocal on one of the songs.

What can you tell me about your Norwegian band mates?  How did you meet them and how did they come to join your band?

Tage Lægreid Olsen (bass) and Henrik Lødøen (drums) are some of the best musicians I’ve ever played with. I have Chris Sansom to thank for meeting most of the musicians I’ve met in Oslo (he mastered the record). I met him right when I moved to Oslo, and the music scene is pretty tight-knit.

You’ve said that the most exciting part of music for you is writing.  When did you start writing songs and what is it you love about songwriting?  How do you feel that your songwriting process has evolved over the years?  What do you feel goes into writing a good song and who are some of the songwriters who have inspired you the most?
Exactly, I love writing music.  I enjoy the part of the process when you realize something has potential.  A guitar part gets written, or a lyric gets written, and it’s not finished yet, but you feel like there’s something there.   I had a great high school art teacher who taught me a lot.  And there were a few people, including him, who encouraged me to write and paint and I am indebted to them.  I started writing/playing guitar when I was 13, and soon after I began recording through the mini input on an old computer with hacked music software.  The wonder of being able to multi-track endlessly was hugely inspiring, and in some ways a lot of what I do remains the same.  But I tend to throw out ideas a lot sooner than I used to, so instead of finishing every little idea into a fully realized song, I usually write a lot of material and only finish the stuff I decide is the most worth pursuing.  I think being excited about music and being willing to try out different things is what goes into writing a good song.  Brian Eno, Paul McCartney, Giorgio Moroder and Daft Punk are some legendary song-writers who continue to inspire me.

I have a soft spot for Italy. I’ve been there twice since moving to Europe, and I feel there is still so much to see that will keep me coming back for years.  Since I am into art, Italy has so much to offer. There is the Venice Biennale every two years and countless world class museums in cities throughout the country.  Specifically, I feel a connection to Calabria, the toe of the boot, which is a little less of a tourist trap than other parts of Italy.

I read that you are a painter, as well!  How long have you been painting and what kinds of paintings do you do?  Do you feel that aspect of your art fits into your role as a musician?  How often do you paint?

Some of my paintings are online, which can be found here:

I tend to work with figures, and color-combinations are a big part of why I like painting.  I just saw a Luc Tuymans exhibit in Venice which was not part of the Biennale, but ended up being my favorite artwork I saw while I was there.
What’s next for you?

I have started writing music for the second Class Photo album.  I don’t want to say too much since it’s still early on, but I would like to incorporate live drums and live electric bass because of the two great musicians I’m working with in Oslo.  The debut album will be pressed in November, and I plan on playing some shows around then.