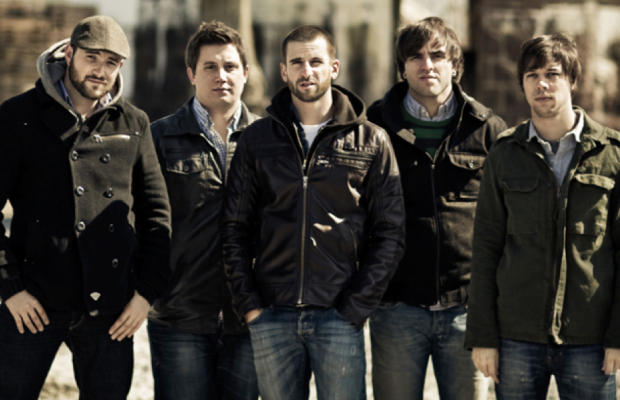 Growing up, how big of a part did music have in your life?
Music wasn’t a big part of my life until I went to a Christian festival called Creation in 2001.
I went with my best friend (and former ABR bass player), Jordan Tuscan, and we ended up only enjoying the bands on the Fringe stage; the heavy bands. Zao, Living Sacrifice, and P.O.D. were the bands I fell in love with and came home with cassette tapes in hand. When I started playing drums in 2003 I realized music was going to always be a part of my life and that God had given me the gift of playing drums and writing music.

What was the first instrument that you learned to play, and why did you choose this instrument?
I learned to play piano when I was 11 and took 4 years of formal lessons before quitting to play drums. My mom thought that learning to read music and performing were important attributes for me to learn and find passion in. I liked playing piano but always had a better sense of meter than melody.

Would you say that you have grown musically since you first joined August Burns Red? How?
When I started playing in ABR, I knew only what I had taught myself in practice and the little I had seen at local concerts. We started touring full time in 2006 and I suddenly became surrounded by other musicians for weeks at a time. I began to realize what was effective musically in a live setting and realize what it took to be a good musician, both in the studio and in the live setting. I think the most obvious point of growth for a musician is to find his/her creativity. Recording our latest album, Leveler, gave me a new found confidence as a musician and allowed me to realize how far I’ve come since our debut album, Thrill Seeker!

What was the biggest challenge that you’ve had to overcome as a band? How did you overcome it?
Losing members is always the hardest. As we were trying to establishing ourselves with the release of Thrill Seeker, we headed out on our first full US tour. Our singer, Josh, realized that touring wasn’t something he felt completely comfortable with and decided to return to school. Finding someone to properly represent your band and be the ‘voice’ of the other members is very tough. We tried out at least a dozen vocalists before finding Jake and realizing that he was the man for the job.

You recently released a new album Leveler. Are you happy with the feedback that you’ve gotten from this album?
Yes, I’m very happy with the feedback thus far. We played 3 new songs on Warped Tour this summer and were amazed at the huge circle pits, chants, and intensity with which the crowds responded to the songs. I know that as a band we are most excited about the growth in musicianship and lyrics on Leveler!

Is there a concept behind this album for listeners to grasp?
I was reading Isaiah 26 last year when I read about God being the ‘Leveler that makes level the road for the righteous.’ Leveler is a spiritual record with lyrics about pain and death and also revival and redemption. God has the final say. He is God, He is good, and our faith and hope lies in Him. Even though all may fall and return to the dust of the earth, our hope lies in God to be the calm after the storm.

What makes this album different from your past releases? Is there anything specific?
I think the dynamics of Leveler set it apart from our previous records. I’ve never recorded drums with ABR that let up and groove the way they do on Leveler. The clean/soft/slow parts are coincidentally my favorite sections of the record.

What is your favourite song off the album? What was it written about?
My favorite song is ‘Divisions’. It’s a song I wrote about the guilt in seeing a friend suffer and feeling hopeless to help them. The song screams at God, asking Him to explain redemption. I like the raw feeling of the song and the authenticity of the words.

What are your thoughts on illegally downloading music? Do you see it being the downfall of the music industry?
I don’t think it’s the most ideal way of acquiring music but I’m not flexing my muscles and pointing my finger at anyone either. Rather, I think it’s important to focus energy figuring out how to work with the ever changing music industry. I don’t think the music industry is failing in any sort of way due to the world wide web of downloads. I’m all about embracing it and realizing that it’s a reality!

August Burns Red was on Warped Tour 2011. What was this experience like for you? Did it differ from your previous years on warped tour?
Warped Tour was incredible this year! We knew loads of musicians and crew going into the tour and essentially spent the summer with them at ‘summer camp!’ I loved being in a bus and having the luxury of seeing so many beautiful locations across the US!

Which do you prefer – playing shows like Warped Tour or playing indoor shows?
I like both environments. Obviously outside shows lack the ‘smoke and mirrors’ of an indoor show and thus don’t have the same level of intensity as a club show. However, who can complain about playing for thousands of incredible fans everyday and soaking up the sun in 48 different states?

What, do you think, is the biggest challenge for musicians to face while on Warped Tour?
I think the transportation from show to show is the biggest difficulty about being on Warped Tour. We had the luxury of a bus while some of our friend’s bands were doing the 20,000 mile tour in a van and trailer. Playing a show in the heat after having minimal sleep on an over night drive is a challenge. I admire and respect the bands that pulled it off!

Is there a message that you are trying to spread through music?
I have a personal relationship with Jesus Christ and that is my priority, my passion. Everything I do is a reflection of that relationship and, seeing as music is such a powerful medium, I write and express my faith in Christ in a way that others can relate to. I hope that our fans enjoy the musical content behind ABR but also realize the authentic faith that we carry in our hearts.

Where do you expect the band will be five years forward?
I have no idea. We have our itinerary planned out into 2012 and no further. We will continue to write music to the best of our ability and hope our fans will appreciate and enjoy it with open arms!