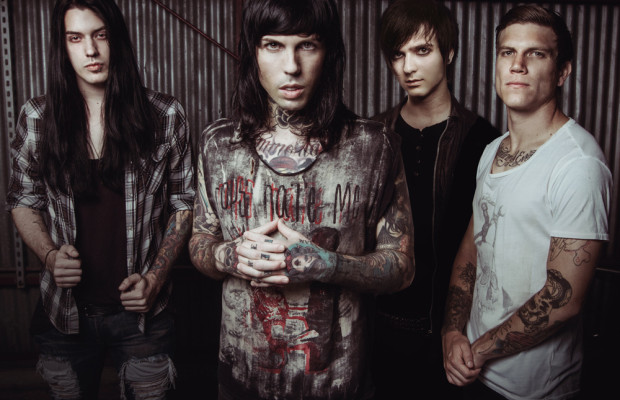 Established metal band, Vampires Everywhere!, recently announced the exciting news that they will be regrouping as The Killing Lights. I had the pleasure of interviewing lead vocalist Michael “Vampire” Orlando about the band’s transition, his plans for the future, and his near-fatal car accident. Read on!

So you were the lead vocalist for Vampires Everywhere! What’s new about your band, The Killing Lights?

I think it’s about a fresh start! There were so many underlying issues [in Vampires Everywhere!] that it seemed impossible to escape the demons surrounding it. The Killing Lights is a new chapter for me both musically and mentally. I was battling crazy demons in Vampires Everywhere! for the 6 years and it was taking a toll on my personal life. I hid all my anger and emotion behind the makeup thinking it would help me deal with all of the fucked up things I was going through. Instead, it just escalated and I started to spiral down. It was time for an immediate change and The Killing Lights seemed like the light at the end of the tunnel.

Do you expect The Killing Lights to appeal to the same fan base as Vampires Everywhere!?

Yes! I also expect it will reach a whole new audience that wasn’t amused by my theatrical side. The Killing Lights is all about being “real” and not ”contrived”. There are so many bands out there pretending to be someone else. I felt it was time to do what I do best, and that’s playing music that comes from the heart. I know that sounds cliché, but in all honesty, it is the truth.

With The Killing Lights’ debut EP coming out this September, you must have had a lot of writing to do. Were there any other musicians who influenced or inspired you?

There were a slew of musicians and producers that inspired DJ Black [lead guitarist The Killing Lights] and me during the writing process. There were a ton of great albums put out this year and we were super inspired by the production of the new Bring Me The Horizon record, Sempiternal. We also had a ton of inspiration from Pantera and Slipknot. I mean, just naming a few won’t do this question justice! I’ve been in the music industry for over 10 years and this is the first record I can say I’m 100% proud of.

Have you started planning a full-length album yet?

We have a ton of ideas that we will put into motion shortly. DJ and myself are always writing and we are stoked to make an LP. We just opened up our own studio called TrendKill Sound in North Hollywood so we’re excited to have a place to write 24/7. I think we should have something of that nature by the summer in 2015.

Do you have any shows, events, or tours planned for the rest of 2014?

We are taking things slowly with touring, but we plan on playing a bunch of shows in the California area in 2014. We’re confirmed for the Sunset Music Conference at The Whiskey A Go Go on September 20th along with Jane’s Addiction, Minus the Bear, and Unwritten Law and we will be headlining our favorite punk stomping ground, Chain Reaction, in Anaheim on October 4th. I’m sure we will be on the road all through 2015.

If The Killing Lights could collaborate with any other artist or band, who would you choose?

I think a collab with Jay Z would be amazing! Haha, DJ loves rap, and I think crossing both genres would be genius. If Pantera were still together, I’d say them as well. Dimebag is and will always be DJ’s favorite inspiration so that would be dope. I also had my eye on this upcoming artist Dorothy! She has an amazing voice and I would love some Dorothy swag on some of our tracks.

You announced on Facebook that your near-fatal car accident inspire the name, “The Killing Lights.” How else has this accident impacted your career and music?

The infamous accident has impacted my life in a million ways. It inspired me to follow my dreams and do more than just get a 9-to-5 job! The doctors said I had an angel on my shoulder and that is the reason I was even alive at all. I wrote about the experience in “Until I Bleed”. The drunk driver who hit me died upon impact and I ended up walking over his remains during the ordeal. This experience has made me stronger and more hopeful about life in general. In VE!, I was venting about the dark side of this experience. In TKL, I try to view this tragedy as a stepping stone to something bigger.

What are your highest hopes for The Killing Lights’ future?

We want to play arenas! We want to make TKL a household name. But most of all, I want to help change lives of people dealing with the same demons I’ve been dealing with for the past 6 years. There is plenty of “pop” in the world. However, life isn’t about unicorns and lollipops. People deal with real life issues – like death, poverty, and depression. I mean, look what happened this week to the funniest man on earth, Robin Williams! All the money and love in the world couldn’t save his life. I want to help people dealing with the same issues. I want to be the rock for people needing an outlet for their pain.

What are you most looking forward to in the second half of 2014?

Our goal in 2014 is brand awareness. Since the start of TKL we have been dealing with the whole switch over from my past project, VE!. Our focus for the rest of the year is to play local California shows and get the name out there. Fans are everything and without them, there would be no TKL, or me for that matter.

We are very thankful that you took the time to interview us. I want to say, please check out our debut music video “Lies Spread Like Fire,” and thank you to all the fans that have supported me since day one! I love you all!