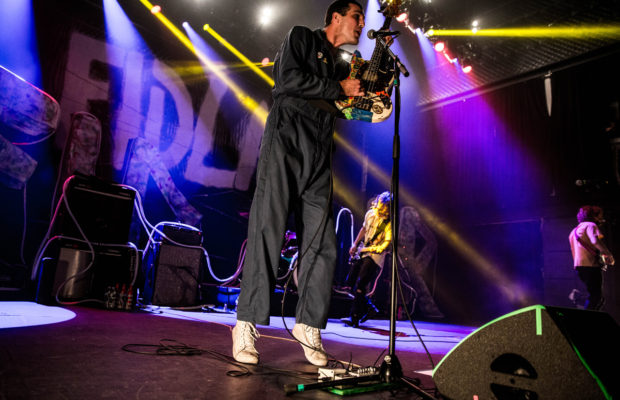 Kids lined W 56th Street outside of Terminal 5 in anticipation of FIDLAR’s “Too Much Tour”, which was hitting Manhattan this past Friday night. Denim jackets adorned with patches, cuffed pants with a stylish selection of high socks and shredded Vans and Converse sneakers were the attire of the evening. All of the misfits were gathering around for an evening of some seriously gnarly surf rock and to let out their frustrations.

Opening band, The Frights, graced the stage at 8pm sharp and kicked off their short setlist with “Kids” off their most recently release You Are Going To Hate This. The barricade that separated the riled up crowd from the band on stage was busting at the seams as security was clearly outnumbered. A circle pit opened up halfway through the set and crowd surfers were pouring over the barricade and into the pit. The band included a cover of Weezer’s “Say it Ain’t So” into their set before concluding with “Submarines” from their self-titled album.

Oakland-based punks SWMRS were up next. The band, who is known for their rowdy sets and lively performances, definitely did not disappoint. Guitarist and lead vocalist, Cole Becker, made a subtle political statement through his clothing by wearing a t-shirt that said “Fuck Trump”. The evening was turning out to be a night of covers, as SWMRS opened their set with a cover of Fugazi’s “Waiting Room”, before diving right into their hit “BRB”. SWMRS, who have used social media to speak out about American politics throughout the election cycle, used their stage presence and their voices to create a welcoming and safe space for all fans in attendance. Before beginning their hit “D’You Have A Car?”, Cole Becker separated the crowd and said “We’re going to make a wall! On any other night we’d call it a wall of death, but tonight it’s a wall of unity!”. The band then counted 3, 2, 1 before diving into the chorus as the crowd ran at each other. Watching from the balcony, it was truly a sight to see so many individuals of different backgrounds coming together in unity through music.

Finally the moment everyone had been waiting for arrived. The lights dimmed and Los Angeles based FIDLAR took to the stage. The band’s name is an acronym that stands for “Fuck It Dog, Life’s A Risk”. The band opened their set with a killer cover of the Beastie Boys’ “Sabotage” before spiraling into the blood pumping and adrenaline rushing “Cheap Beer” off their self titled debut album. Feet dangled from the balcony of Terminal 5, as crowd surfers floated atop the hands of the young fans below. FIDLAR was throwing the party to be at in NYC and they did not disappoint. The band played a packed setlist, including hits like “No Waves”, “Stoked and Broke” and “Why Generation”. As the night continued, the mic stand of bassist, Brandon Schwartzel, became a collection spot for crowd surfers lost shoes. As the band played to a crowd of majority rowdy teenagers, t shirts, pants, shoes and jackets were flying through the air. Everything felt alive within Terminal 5 for just that night and every person in attendance was dancing. FIDLAR played a hefty 18 song setlist before taking a brief pause and returning for their two song encore, in which they, too, used their voices to speak out against President-elect Donald Trump. Lead singer and guitarist, Zac Carpenter, demanded a single favor of the crowd that evening “On the count of three, can I get a ‘Fuck Trump’?… 3, 2, 1!” and all three level of Manhattan’s Terminal 5 erupted in a vigorous “Fuck Trump” chant.

FIDLAR’s “Too Much Tour” is a raging party, there is no doubt about that. It was one of the best shows that I’ve been to this year and they are a must see for anyone and everyone. It is inspiring and motivating to see such young bands use their voices and their influence for the better and to speak out against injustices in this world. Despite being one of the rowdiest shows I’ve ever been to, it was also one of the most politically charged shows I’ve ever been to. FIDLAR, SWMRS and The Frights all came together to create a safe space for their fans and to speak out against intolerance and hate within out world.