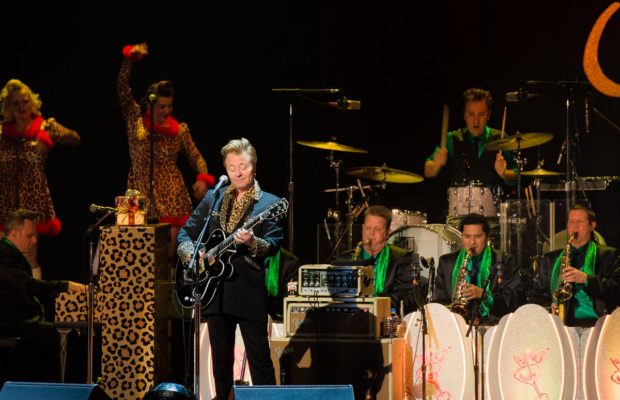 The Brian Setzer Orchestra brought their 13th Annual Christmas Rocks concert to The Louisville Palace Theatre in Louisville, KY on December the 6th.  The theatre was packed with an enthusiastic sold out crowd.  Brian Setzer and his orchestra played their versions of some Christmas classics, such as Rockin’ Around The Christmas Tree and Here Comes Santa Claus, as well as the classic hits Stray Cat Strut, She’s Sexy + 17 and Jump, Jive and Wail.  The crowd was singing and dancing and having a great time!  The stage was covered in holiday props, including a Christmas tree, a Nutcracker doll and presents.  The band, as well as the back up singers and dancers, wore festive holiday attire, with many wearing Santa hats too!   Brian Setzer wore a black suit with a leopard print collar, sporting his classic pompadour.  They left the audience filled with happiness and plenty of holiday cheer.