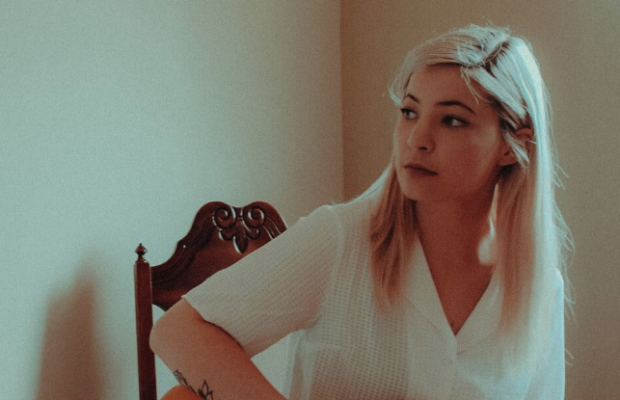 Words by Emily May

Nineteen year old canadian singer/songwriter, Taylor Janzen, is releasing her forthcoming EP Interpersonal on August 10th. The EP is a collection of deeply personal songs that share Janzen’s upbringing and struggle with mental health and the discussions surrounding it. Janzen took a moment to sit down with Stitched Sound to discuss her past, her passions, her EP and her future as a musician.

Taylor Janzen grew up in a small town outside of Winnipeg, Manitoba in Canada. Janzen had a strong religious upbringing and attended a small school up until her high school graduation just a few years ago. Due to her religious upbringing, Taylor’s family and friends rarely ever talked about the difficult things they were experiencing in their own lives – often turning to religion to help find answers to their problems.

“I grew up around a lot of people who didn’t like talking about negative feelings, so songwriting was the only way I could get anything out.” Says Janzen. Writing the music wasn’t necessarily the struggle for Janzen, “I’ve loved music my whole life” she shares. Her main worry was releasing the music that she had been working on for years that detailed her struggles with mental health. “I’ve always been a person who feels things in very large capacities, and music felt like the only place where that wasn’t always a bad thing.  Once I started putting out music, I was so scared it wouldn’t go over well, because it’s all quite dark”

However, the response to Janzen’s music has been overwhelmingly positive and she has been making a name for herself around the Winnepeg area over the course of the last year. “I started actually performing last year through a program that Winnipeg Folk Fest puts on where they let local artists play a couple songs at the festival and get mentored.” Says Janzen. “Since then I’ve kinda just been playing music around Winnipeg and hoping people like it.” And people have definitely been liking it. Janzen released “Stations” off the Interpersonal EP in June and since then, her name has been popping up throughout the industry, receiving praise from notable music blogs like The Line of Best Fit and Broadway World.

“It feels so incredible. Overwhelming in the best way. It’s such a scary thing to put out music so personal, especially when you have no idea what to expect. I’m incredibly grateful.” Janzen says of the response to her new music. Her first single offers listeners a small glimpse into the world of Interpersonal. The song is filled with deeply personal lyrics that are softly layered over a minimalistic and slow-building guitar riff — an honest and raw effort that serves as Janzen’s way of breaking her silence about the emotional abuse that she endured growing up. “I wrote Stations in my room when I was 17 about the isolating and complicated feelings when one experiences psychological abuse from a loved one, regardless of the nature of their relationship. I think it was my attempt at breaking silence in a way that I previously didn’t think I could.” She says.

The recording process for Taylor’s Interpersonal EP was an interesting experience due to the fact that all of the songs on the record were written in complete solitude, but recorded in the presence of other individuals. “I recorded them [the songs] with my friend Shane Patience at his house. It was a really different, but fun experience to have another person involved in the recording process. Writing the songs was a very cathartic experience for me though. I think everyone has their own form of “therapy”, and for me that’s definitely music.” Says Janzen. Throughout the recording process, Janzen also ditched her notable acoustic guitar and traded it in for an electric guitar, “I actually don’t even own an acoustic guitar anymore, so when I do use one I have to borrow one off one of my friends. I love playing electric guitar more because I feel it’s more versatile and supports the weight/grit of the songs a bit better than acoustic.” Janzen says when asked about the switch.

Taylor Janzen’s Interpersonal EP will be released on August 10th and she will be playing some shows later this summer and throughout the fall as well including Manitoba’s Real Love Festival. You can stream her newest single “The Waiting Room” below and make sure to stay up to date with Taylor by following her on Instagram and Twitter!