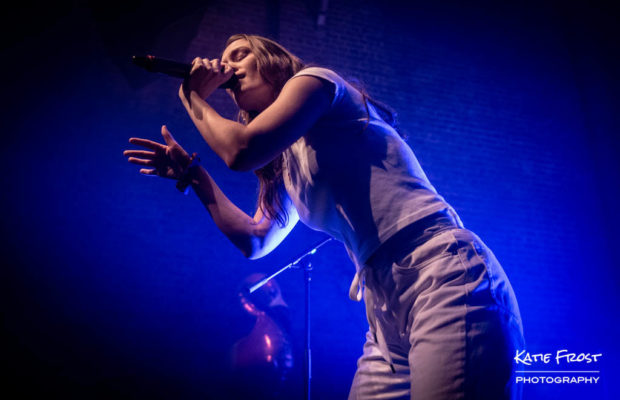 Anna Of The North with Otta

On Monday night Norwegian alt-pop artist Anna of the North (Anna Lotterud) played a sold-out show at Village Underground in London’s Shoreditch. I first discovered Anna’s music through a friend and took an instant liking to it; her songs are soft and delicate but also soul-bearing and honest. When it was announced that she was playing a headline show in London I knew I had to go along to check out her music live. I arrived just before doors were due to open and joined the queue of excited fans eager to get inside the venue.

First to take to the stage at around 8:30pm was singer/song-writer Otta, who was joined on stage by a bassist and guitarist. Otta’s vocals were delicate and haunting, and I really enjoyed her set – particularly the tracks that involved a saxophone, as you don’t see that every day! She seemed very grateful to be opening for Anna and also thanked the crowd for being so receptive to her music.

At around 9:30pm, Anna burst onto the stage looking incredibly excited to be there, and launched straight into “Moving On” from her album Lovers (released in 2017). The 1000-capacity venue was full and there was a great atmosphere in the room. Anna was full of energy and had a smile almost permanently on her face as she moved and grooved around the stage, regularly leaning forward to interact with the crowd. Her songs sounded fantastic live and she played a great set which featured tracks from Lovers such as “Baby” and “Money”, plus her 2014 debut single “Sway”. She also played her latest single “Leaning On Myself” which was released on 6 February.

Anna is a great performer and I would definitely recommend going to see her live. She will be heading out on her first ever tour of the US in April. Get all the details on her website.

Anna of the North Set-List:
Moving On
Money
Always
Feels
Friends
Baby
Oslo
How It Used To Be
Leaning On Myself
Sway
Lovers
Someone
Dreamer
Thank Me Later