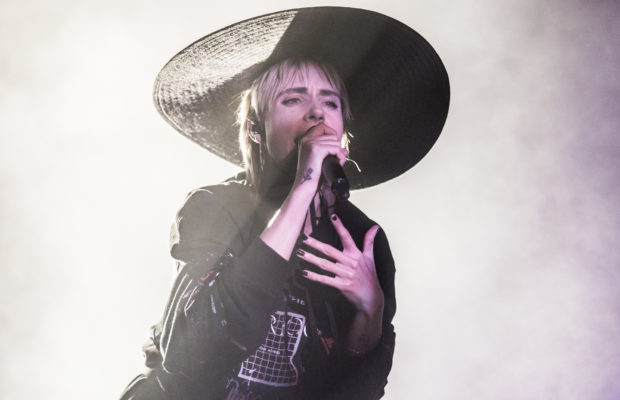 Danish singer/songwriter and producer MØ performed to a sold-out crowd in Toronto at The Danforth Music Hall on Wednesday, January 23rd. Doors opened at 7 pm and the venue quickly filled with concertgoers, trying to find a close spot to the stage. Opener, Abra performed a quick set and got the crowd dancing and kept them entertained as they eagerly awaited MØ’s performance. The lights dimmed and excitement filled the air as the band took their place on stage. Once MØ stepped out the crowd erupted into a loud roar and as the lights came on, she stood at the back of the stage and took everything in, looking around at all the people the largest smile appeared on her face, clearly just as excited as we all were to see her.

Her lighting set up was simple and elegant; a white backdrop with projections of palm trees made you forget how cold it was outside. Front lighting cast her shadow onto the white sheet making her appear larger than life. From the moment the music started, she jumped and danced across the stage to every beat, her voice was flawless, sounding just as raspy and perfect as the album.

In the middle of her set, she jumped down into the photo pit, climbed over the barricade and into the crowd. She continued to sing her way through, stopping to dance with fans as she made her way up to the balcony to join some very unsuspecting viewers. She had the crowd roaring with her incredible performance. Her energy was infectious and she was mesmerizing to watch as she danced and poured her heart out to every song. A full moon appeared on the sheet behind her as the song ‘Blur’ began to play and when the beat dropped she turned to the white sheet and began tearing it in half. She only slowed down for a moment to play the piano on her song ‘Mercy’ but picked it right back up again. She ended her set with ‘Way Down’ and sincerely thanked the crowd for attending. The lights dimmed as she left the stage but the crowd continued to cheer and whistle, wishing for one more song, only to be blessed with a 3 song encore which included ‘Lean On’ (Major Lazer Collab), ‘Don’t Leave’ (Snakeships Collab) and ‘Final Song’. MØ climbed down once more into the pit and was carried by her adoring fans as she sang ‘Will these be our final words? Will they remember us for something?”.

She’s best known for her Major Lazer collaborations but her second studio album is sure to make her a household name. Forever Neverland, released on October 17th, 2018 has received critical acclaim and is quickly gaining her notoriety, with singles like “Sun in Our Eyes”, “Way Down” and “Imaginary Friend”, that show the artists unique ability to blend different genres of music.

Her collaborative track record is quite impressive, co-writing and being featured on songs with Iggy Azalea, Ariana Grande, Diplo, Justin Bieber, Jack Antanoff (Bleachers) and many more. Her most recent single “Blur”, featuring Foster The People has reached over 3 Million views since the official video release last month.

It’s no surprise MØ is selling out venues across the world. She is an incredible songwriter and passionate performer, clearly a force to be reckoned with. This is definitely a performance you don’t want to miss. She’ll be in the States until February 9th before returning to perform overseas, at festivals and including two dates at the famous O2 Arena in London and more tour dates listed below!