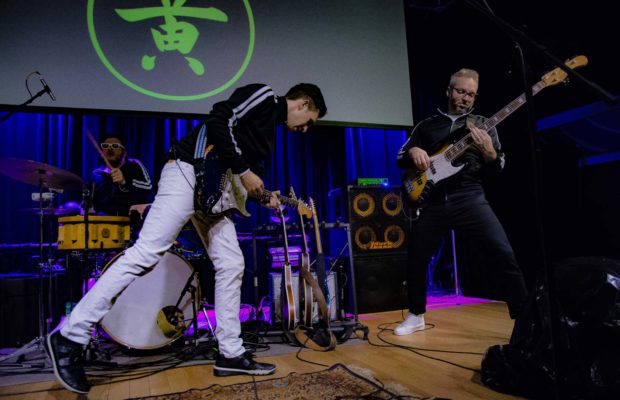 Cory Wong, who currently performs with Vulfpeck and Ben Rector, has recently started his solo project, The Cory Wong Band.  Performing recently to a packed house in Louisville, KY, the air was buzzing with the wonderful, positive and excitement-filled energy of the fans who had turned out in droves on this Tuesday night to see the show.  Having not seen Cory Wong live before, I wasn’t sure what to expect, but was delighted with the show from start to finish.  The band came out onto the stage in matching outfits, a band uniform of sorts.  All of them wore black and white jackets with the Wong pizza logo on the back, with Wong wearing white pants and black shoes and his band wearing black pants and white shoes.  The band performed crowd favorites such as “The Optimist”, “Juke On Jelly”, “Dial Up” and “Rubens”.  Wong has an incredible stage presence, and had the crowd cheering dancing and laughing throughout the set.  He is an incredible guitarist who feels the music that he plays and really showcased his talent this evening with several guitar solos.  He and his band interacted with each other frequently throughout the set, with each member getting a solo while the rest of the band looked on.  It was very apparent that they all have a great deal of fun together on stage!  He chatted with the crowd several times over the course of the evening, telling funny stories and sharing commercials that he made and starred in that were shown on a screen behind the stage.  The commercials included one of him selling a jam band starter kit and one for a smooth jazz starter kit, both of which had the crowd roaring with laughter!  The band ended their set and briefly exited the stage before coming back out for an encore, having changed into sport’s looking black and white jerseys in place of the jackets.  Wowing the crowd with a two song encore, they kept the crowd dancing until the very end!  It was a great night of music!  Australian musician Emily Browning opened the show.