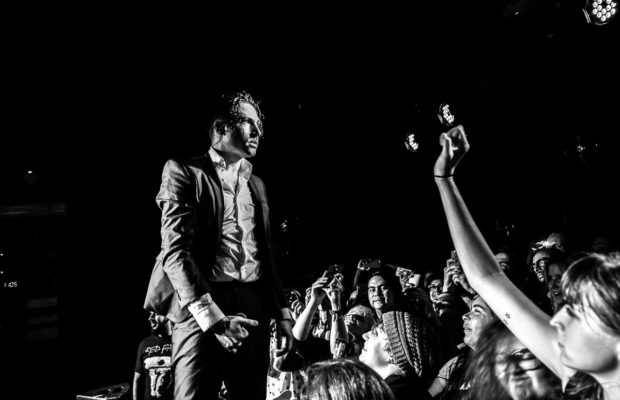 Mini Mansions with Nation of Language

On Monday July 23rd Mercury Lounge had a line forming outside of it on this hot summer night in anticipation of the artists that were playing there that night — Nation of Language and Mini Mansions.

Nation of Language — a group of Brooklyn synth rockers— took to the stage first to a packed Mercury Lounge. Led by singer/songwriter Ian Devaney, they played their punchy electro-pop new-wave songs such as “Reality,” “I’ve Thought About Chicago,” and “On Division St.” to an entranced crowd that was bobbing their heads along.

Mini Mansions— a band that was founded in 2009 after the Queens of the Stone Age decided to take a break after touring in support of Era Vulgaris— took to the stage with the crowd going wild. Everyone was excited to see them— some had traveled from the west coast while others came from even farther destinations such as Europe to see them in New York City. With Michael Shuman, Zach Dawes, and Tyler Parkford up on stage we were in for an excellent night of music. The air in the room was thick with fans contagious energy. Mini Mansions sang songs off of their albums The Great Pretenders, Mini Mansions, and some new ones. “Majik Marker,” a song off of their debut album entitled Mini Mansions, was sung at the top of everyone’s lungs in the audience.

They are currently on tour with the Arctic Monkeys for the rest of the summer— along the way they will be having some B-side shows that you shouldn’t miss if they are coming near you.