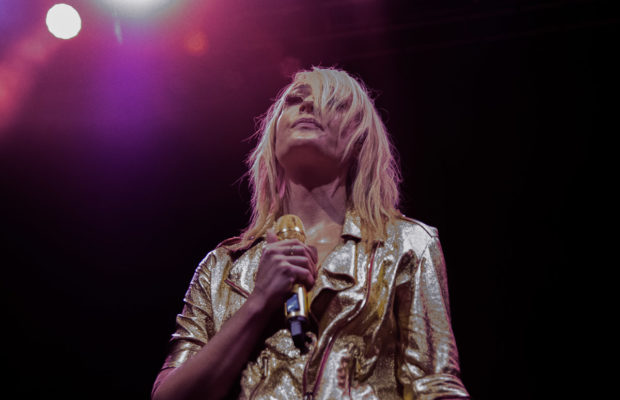 The Gathering presents Metric with Everything Everything, Kitten, Ruen Brothers, Culture Wars and Tatiana Demaria

The Gathering, which is a showcase platform for new and developing bands, presented Canadian indie pop/electronic band Metric in Louisville, KY recently.  The show featured five emerging opening bands, each introduced to the audience by a radio personality or other member of the music industry.  London indie alternative artist Tatiana Demaria started the evening out, getting the crowd hyped with her edgy, punk-tinged songs.  Austin electronic rock band Culture Wars took the stage next, wowing the crowd with their high energy and infectious sound.  Next up was the English rock band Ruen Brothers, who excited the crowd with their mix of old school and modern rock and roll.  LA indie rock band Kitten then took the stage and got the crowd energized with their energetic, whirlwind set, with singer Chloe Chaidez taking the stage with a pink bobbed wig and white vintage dress, only to rip them off after one song to reveal a lime green vinyl pant and crop top suit!  She proceeded to bounce around the stage and into the crowd, delighting the fans with her energy.  The final opening band was English indie rock band Everything Everything, who got the crowd dancing with their fun, electronic beats.  The crowd started cheering in anticipation as Metric took the stage, starting their set with “Black Sheep”.  Along with some newer songs, the band played plenty of their classic hits such as “Satellite Mind”, “Gimme Sympathy”, “Sick Muse” and “Gold Guns Girls”, resulting in plenty of exuberant sing alongs from the crowd!  Emily Haines is a dynamic front woman, spending most of the set dancing around the stage, often standing directly at the edge in order to interact directly to the fans.  The band ended the set with “Rock Me Now”, then left the stage and returned moments later for an encore.  Starting off with their hit “Help I’m Alive”, the encore ended with “Breathing Underwater”.  It was a fun evening of music as well as the introduction of emerging bands who surely gained some new fans this evening!