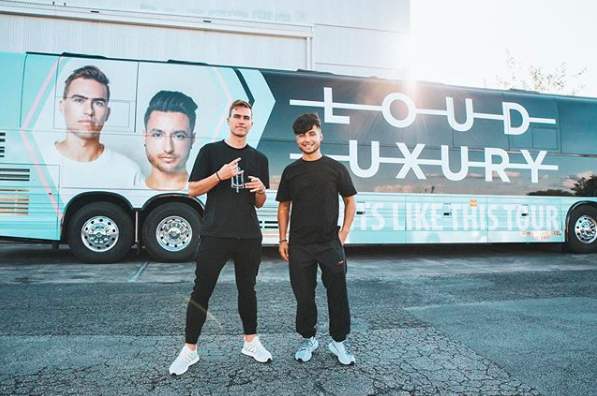 Two months after the beginning of their Nights Like This tour, Loud Luxury made their stop in Victoria, British Columbia, directly after their two sold out shows in Vancouver. With the duos hit song “Body” and their newest radio hit, “I’m Not Alright (feat. Bryce Vine)”, it is no wonder that so many of their shows have sold out.

Around 9:30PM the doors opened, and fans crowded inside the venue, awaiting Loud Luxury’s performance. Backstage, the green room was crowded with people chatting and milling about, waiting for the interview to start as CID played a killer set on stage.

Usually flying all over the world to play festivals, like Tomorrowland, or solo shows, like their Las Vegas residency, settling down and touring in a bus is something different for Loud Luxury. “It’s actually really nice,” says Andrew. The bus, which fits the whole crew, is spacious enough to accompany everyone just right. “It’s a nice environment” Joe spoke of the bus. “Everyone’s pretty respectful.”

With the tour bus came the faces of both Joe and Andrew on the side of the bus with their Loud Luxury logo. “It’s like a walking target” noted Joe about the bus. Of course, this caused a chuckle from the few of us. “It’s like, we’re coming to all of these places in a city and because of our faces all over the bus, it’s very clear that we are in town,” said Andrew. “It’s a good statement”.

With travelling to different cities, I had noticed that the duos live show would change from show to show. Certain songs would be added or retracted from the setlist, moments of the show changed because “it depends where we are,” explained Joe, “most cities we have played before so we will usually have a general idea of where we’re going to be.” Each city’s atmosphere is definitely different, with the two Vancouver shows giving off a completely different energy than the boys’ Portland show. “We kind of treat it wherever we are,” said Andrew. With the constant discussions on stage and the seemingly last-minute changes, it’s obvious that they would play for themselves and their current city. “It just depends on the environment, no matter what, we’ll bring the party.” The energy brought at every one of Loud Luxury’s shows does, in fact, bring the party. “When we’re going later, we play more underground stuff,” explained Andrew, referring to the shows in Vancouver, where the show went until 2:30am and 3:30am. “We just have fun!” Joe added. Loud Luxury’s live shows do show the party that they bring, having seen four of their shows myself, it is easy to say that they are extremely themselves on stage.

With an energetic live show such as Loud Luxury’s, it must come with a lot of preparation. It took “months and months” to prepare, said Joe. “When it started, we were collecting some of our favourite music and songs that we love, and being like ‘How can we edit this in a way that makes sense for our show?'” When asked about their live show, Andrew explained, “We were bouncing ideas nonstop, and we still are honestly. Every show we’re like ‘Yo, maybe this would be better’.” For the first Vancouver show, Loud Luxury had added a beautiful mashup of Veldt and Pompeii which they would again play at tonight’s show. “We’ve been changing it up. Like, we had an idea for the first show and ever since then it’s been changing,” Joe added. “It’s a work in progress but in the best way when we’re able to change stuff on the fly” Andrew concluded.

The conversation moved on to the tour itself. The duo had traveled to multiples of different cities and experienced many different attractions along the way. “It’s really special being back in Canada,” said Andrew. “Especially being in Western Canada, being around the mountains and the lakes”. With a new tour brings new adventures for the boys. They had been to the Grand Canyon and, in Vancouver, Andrew explains that “we took a helicopter ride through the Fraser Valley.” Joe added that it “was probably the most memorable thing that we’ve done so far on tour”.

Then the conversation shifted to that of the duos creative processes and their future after the Nights Like This tour is over. With “Body” being a smash radio hit and “I’m Not Alright” coming up right behind it, how do they write these incredible hits? “In terms of how we write, we sort of make what we feel and what we like and hopefully other people like it as well,” explained Joe.

There’s also the fact that these boys are so incredibly involved with their fans. From constantly interacting with fans on social media to staying late after every show in order to meet every last person. “Fans are everything. They’re the reason we play sold out shows” said Andrew, referring to multiple shows that they have sold out. “We just return the favour with whatever we’re able to do.”

The duos stage presence is also something that they are incredible at displaying. Their energy constantly matches what the audience gives them and more. But is everything they do on stage planned? “We have certain moments that we’ll do” said Joe. Andrew expanded; “It’s very in the moment but we also like to be like ‘Okay, for this song we need to make this special, so this is something we like to do'”. With these spontaneous moments, I had observed the boys jumping into the crowd and going crazy on the edge of the stage with the audience. “We’re just having a good time. We are super lit, and you really want to party with everyone” said Andrew. “It’s not really a planned thing”. And with the rest of tour on the way and new music being played at shows, could a new album be on the way? “Maybe not an album but something like that,” said Andrew, hinting that a future release could be something that “might be the name of the tour”. Of course, the duo would leave their fans on their toes, but with the unreleased music that is being played on the Nights Like This tour, it is obvious that these two have a lot in store for the future. They’re going to be “constantly bringing the party” said Andrew. At this point in the tour, there had only been satisfied remarks all across social media. “We’re halfway through now and it’s going really well so far,” said Joe. With killer visuals and energetic performances, it is clear that “you’ve got to come to one of these shows to see that for yourself” concluded Andrew.

The Nights Like This tour ends in December, leaving it safe to assume the boys will be going back home to shut away for a while. “We’re going to be working on a lot of new music” Joe confirmed. “We’re doing this crazy tour right now, 65 dates or something like that, so after that we’re going to take some time to be in LA, work on new music and just really focus on that”.

The night ended off with a killer performance by Loud Luxury with the entire crowd being completely into the set and the duos energy. With a few unreleased songs played as well as some other popular hits, it is clear to say that the duo’s performance completely entranced over everyone at this show. The excitement for new music grows with each night as the Nights Like This Tour continues to bring out more and more surprises.