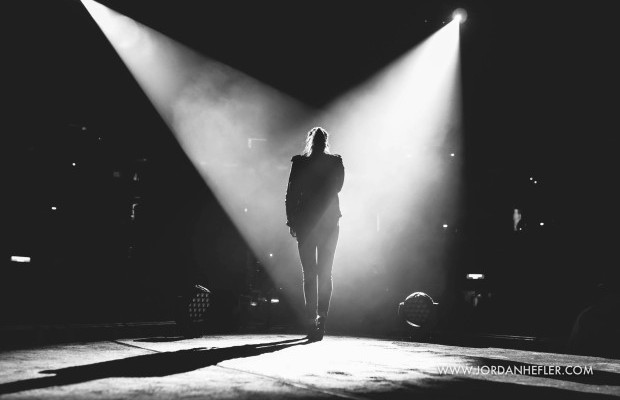 PVRIS has had quite the year so far. Once finishing up their tour with Fall Out Boy and AWOLNATION, they wasted no time jumping over the pond for their headlining European tour. Playing sold out venues that hold a couple thousand individuals every night, it is clear that the expectations were high and PVRIS certainly didn’t disappoint.

PVRIS hit the stage a little after nine, opening up their set with “Smoke”, a hazy fog and dim lights surrounding them. Hanging behind them and displaying images from their past music videos, the White Noise mirror stood as a reminder to the audience of the songs they were going to hear through the night.

Their first full-length album, White Noise, has only been out for a year and a half, but over that time, PVRIS has managed to bring in an incredibly close and loyal fan base. Nearly everyone in the venue had on some form of PVRIS merch, mostly shirts from past tours and thick rubber bracelets hanging on their arms.

Along with the dedicated fan base, the members of PVRIS – Lyndsey Gunnulfsen, Brian MacDonald and Alex Babinski – have managed to perfect their stage presence and really put on a memorable show for everyone to enjoy.

Throughout the entire set, the members simultaneously interacted with the crowd while playing their instruments, both Brian and Alex switching between their respected instruments of bass and guitar and also keyboards.

As the beginning notes to “St. Patrick” rang through the speakers, the overwhelming round of applause that emerged from the crowd made it clear that many had been waiting to hear that song live for a long time.

It was during this part of the night that Lynn’s role as the front-woman and singer of the band really came out as she commanded the crowd, getting them to sing and jump along during the upbeat chorus. With Brian and Alex dancing in-sync to the beat and Lynn running around, interacting with everyone squished against the barricade, the members of PVRIS seemed to enjoy performing this song as much as the audience loved hearing it.

One of the most special moments of the night was one that many fans weren’t expecting. After finishing off the energetic song “Fire”, Alex and Lynn were left alone onstage with just her microphone and Alex’s guitar. Deciding to take a step back in time, Alex began the opening chords to “Only Love”, one of the first songs PVRIS ever released and one that is not included on their debut full-length album.

A track that not many people in the audience knew, the simple love song took everyone back to the very beginning of PVRIS before their sold out tours and major success.

Following that, the lights on the stage were cut and Lynn had everyone in the venue hold up their phone lights, illuminating the crowd and entire venue. Performing a stripped down version of “Ghosts”, Alex and Lynn remained onstage, the restructured song giving the opportunity to show off Alex’s incredible guitar skills and Lynn’s powerful voice.

Belting out the choruses as they originally appear on White Noise, Lynn’s vocals filled the entire venue, showing just how capable she is as a singer and performer.

Before kicking into their song “Holy”, Lynn asked the same people that held their phones up during “Ghosts” to put them away, explaining how she felt people need to be more present in the moment and not spend the entire night on their phones. The crowd seemed to listen, the majority of them putting their devices away to watch the performance without any distractions.

Lynn, however, called out the two or three attendees in the crowd that kept their phones out. While the accused were probably very excited to receive attention from the singer, they immediately listened to her instructions, not one phone appearing in the sea of people for the rest of the song.

The request, though rather small, showed the loyalty and respect PVRIS fans have for the musicians onstage and the music they create.

The encore of “You and I”, the newest song to be released from PVRIS and one that will be featured on the re-release of White Noise, due out at the end of the month, was the moment that was discussed the most on social media by the band.

With Lynn holding out her microphone and the crowd of nearly 2500 singing as loud as ever on the chorues, the band was able to close their set that night being reminded of just how far they have come.

As mentioned by Lynn during the night, PVRIS has managed to move up from playing London’s Barfly to The Forum in a little over a year. With the reissue of their album set to drop at the end of the month and more touring to happen later in the year, their sold out shows around the globe are proof enough of what PVRIS is capable of and what the future holds in store for them.