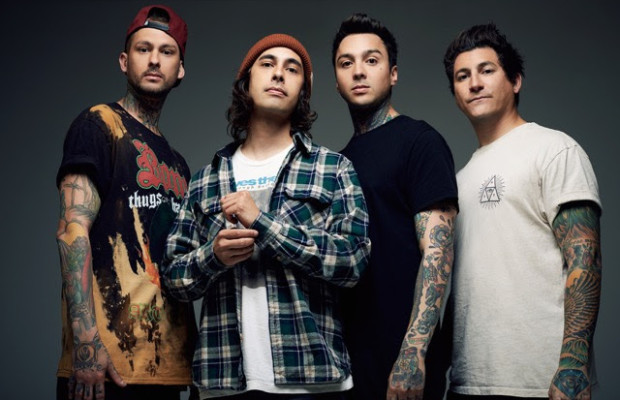 After being locked away in the studio for well over a year, Pierce The Veil kicked off their first show since the completion of their new album, Misadventures, at the bustling Oxford Street HMV, located in the center of London.

To an intimate crowd of three hundred of their biggest fans, Pierce The Veil took to the stage to perform old favorites and new tracks off of Misadventures.

Opening up with “Texas Is Forever”, the first single off of Misadventures, the loudness and immediate excitement from everyone in the crowd was proof enough just how highly anticipated this new album is for all of their fans.

Playing an energy filled performance of “Bulls In The Bronx”, from their 2012 release Collide With The Sky, that left the crowd singing over frontman Vic Fuentes, the band kicked in with “The Divine Zero”, another track off of Misadventures that was released back in June to tie over their eager fans until the album release.

With a mix of strong percussion breakdowns from drummer Mike Fuentes and heavy guitar riffs played by both Vic Fuentes and Tony Perry, “The Divine Zero” was a highlight of the night, the song showing off each of the musician’s ability with their given instruments and also the quality of songwriting that is to come with the new set of songs featured on Misadventures.

Carrying on with “Hold On ‘Til May”, a fan favorite track off of Collide With The Sky, Vic Fuentes let everyone in attendance really take the lead on the performance, the crowd singing the majority of the song while the musicians onstage stared back with both smiles and looks of humility on their faces. The performance was a testament to the passion their fans have and also showcased just how much the band has missed performing gigs over the past year.

Throwing in a performance of “Caraphernelia”, a moment in the night that made diehard PTV fans that have been around since the early years incredibly happy, the members of Pierce The Veil gave fans the ultimate treat by performing a brand new track off of Misadventures.

Having been released that very same week, “Circles” shows a more pop-orientated side to the group, the vocals featuring minimal screaming from singer Vic Fuentes and the verse and chorus breakdown showcasing very simplistic, pop influenced guitar riffs and percussion rhythms.

Overall, “Circles” left everyone in the room intrigued and excited to hear more of Misadventures, but just like everyone else, they will have to wait for the album to drop on May 13th via Fearless Records.

If their released tracks are any indication of what to expect from this new album, it appears that Pierce The Veil have reinvented their sound this time around, throwing in more pop elements than what have been shown on their past albums.

Closing off the night with “King For A Day”, undoubtedly Pierce The Veil’s most popular song to date, fans walked away from the performance satisfied by the mix of new, old and favorite tracks they were able to hear and see performed by one of their favorite bands.

With tours around the world that are already starting to sell out, it is safe to say that Pierce The Veil’s back with a bit of a point to prove. While there are still a few weeks remaining until the album is released for the world to hear, this next chapter for Pierce The Veil is looking to be anything, but a misadventure.