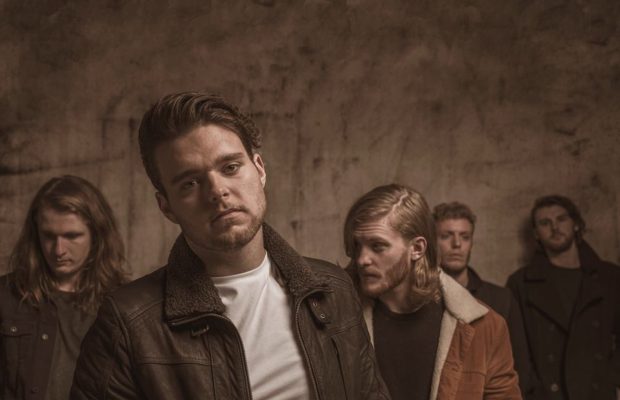 Hailing from Bath, a town in the rolling countryside of southwest England, Bare Knuckle Parade took to the stage at the prestigious Barfly, delivering their indie-folk rock sound to a crowd of excited people on a buzzing Friday night in Camden.

As soon as their first song, “Patchwork”, kicked in, everyone in the room watched and danced along, making it evidently clear that their upbeat folk influenced music was exactly what they wanted to hear after a long work week.

The five-piece band and all of the gear might have been crammed on the stage, but the limited amount of space certainly didn’t stop them from giving their all during their performance. Sounding as good live as they do on their recorded material, the looks of glee on their faces throughout the set showed just how passionate each member is for the music Bare Knuckle Parade has produced over the years.

“Salt and Ash”, a track that frontman Jamie Beale announced was written in a van with no windows while on tour, had a more rock influenced guitar then the previous songs in their set, the “la la la’s” in the chorus allowing those in the crowd to get involved and sing along with them.

Their brand new single, “Diamond Eyes”, that was released on March 4th, was undoubtedly their best performance of the night. As a track with a hard hitting intro, beautifully written lyrics and an easy to remember chorus that listeners can join in on, this is the perfect song to hear live. It’s fun, energetic and greatly encompasses Bare Knuckle Parade’s sound and overall live performance.

A highlight of the night was “Star of Dundee”, a song that not only showcases the members’ ability to harmonize their vocals, but also greatly shows each of the musician’s talent on their given instrument, delivering a perfect medley of guitar, keys, percussion and ever present banjo melodies. As the perfect tune to dance to, many in the audience were doing so, making it one of the most energetic moments in their set.

Closing the night with “Ghosts”, a track off of their 2014 Iron Lungs EP, their entire performance pleased everyone in the crowd and also showed just how great of musicians each member of Bare Knuckle Parade really is.

Whether you love folk or rock, Bare Knuckle Parade’s managed to combine the two genres, creating a harmonious sound that anyone can listen to and enjoy. With poetic lyrics that are far from generic and a live performance that is sure to memorable, Bare Knuckle Parade is an act everyone should be familiar with.