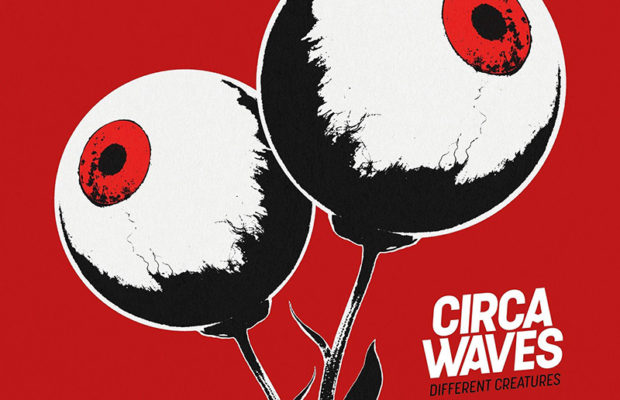 While bubblegum pop and auto-tuned hip-hop is on the rise in the mainstream music industry, there’s a different group of people who are bringing back the 00’s guitar riffs and angst. British rock quartet Circa Waves belong in the latter group. While known for their freeform pop-influenced 2015 debut record, the band has delivered listeners with a darker side of the band and strong sense of maturity on their sophomore release Different Creatures.

In the last two years, Circa Waves have spoken about wanting to create music that is more dense and meaningful and Different Creatures does just that. The band eases the listener into the new, heavier sound with opening track “Wake Up,” which begins with a piercing guitar before drums come rolling in and listeners are introduced to a more familiar sound. Perhaps the most poignant track on the record is the title track. While upbeat and effervescent in its sound, the lyricism sheds light on a much heavier topic. “And 20,000 souls are sold tonight / Making us their home,” sings lead singer Kieran Shudall. A bewildered response to the British government’s handling of Syrian refugees.

“Stuck” is a grunge rock track that is fit with powerful based and melodic guitar, that pulls from their old sound and puts the 00’s spin on it. The closing track, “Old Friends,” is more of a 60’s Beatles-esque slow jam, in which Shuddal seemingly has a a sudden jolt of regret cutting through the track’s shuffling pace.

While many Circa Waves fans were probably expecting something more indie pop like their debut, what they got was very different. Different Creatures lives up to its name, delivering listeners with a new, heavier and more mature side of the band. The record has its highs and lows and like all changes in life, it happens gradually. The record may not have had the blown away effect that their debut had, but it will be exciting to see Circa Waves slip into this new persona they have created for themselves.