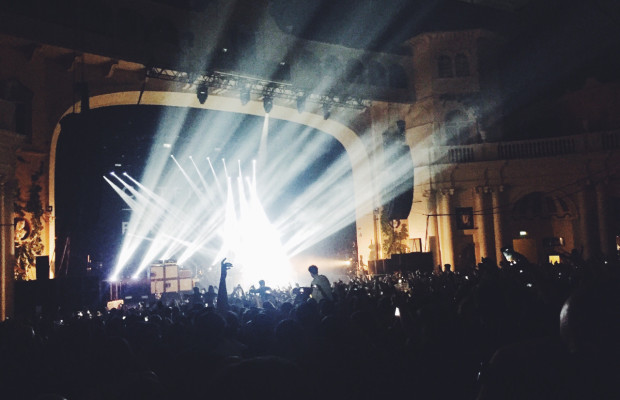 Energy in the Brixton Academy was incredibly high for the second of two sold out nights for the band from North Wales. As their first major tour since forming back in 2007, these are the biggest headlining shows they have played to date.

With their debut album, The Balcony, released back in 2014, Catfish and The Bottlemen had a twelve song set list to captivate the audience. However, as soon as they took the stage and the first notes to “Rango” filled the room, it became evidently clear that the Brixton crowd became captivated by the band long before the start of the show.

With everyone in the crowd already having a few drinks under their belts, the second song in the set, “Pacifier”, caused an eruption of energy to emerge from the sea of people. As one of the biggest songs off of The Balcony, the Catfish and the Bottlemen anthem hoisted crowd surfers up in the pit and caused half empty beer pints to soar through the air, setting the tone for the night.

From past experiences, seeing a band who only has one album out can be problematic for a few reasons. While the biggest downside for Catfish and the Bottlemen was only getting to play a twelve song set, having one album actually worked in their favor during their gigs at Brixton. Fans were dancing and screaming along to every single song, allowing there to never be a dull moment during the set. The setlist was concise and fans knew what they were going to hear, causing the crowds’ voices to sometimes overpower frontman Van McCann.

Added into the set was  “7”, a track not featured on The Balcony. With no introduction, fans got the surprising treat of hearing upcoming, unreleased music from Catfish and the Bottlemen. The track was refreshing for fans that haven’t heard any new tracks since The Balcony was released last year and they responded to the unfamiliar track very warmly, the band earning an extremely loud applause at the end.

The most memorable moment for not only those in the crowd, but also for Catfish and the Bottlemen, came during the performance of “Hourglass”. As a stripped down track off of their album, and also an overall fan favorite, the crowd erupted into cheers as soon as McCann took to the stage with an acoustic guitar.

This particular performance is a great example of the mutual relationship between the fans and Catfish and the Bottlemen. At one point singing louder than McCann himself, the frontman moved away from the microphone and allowed the crowd to sing the second chorus in its entirety. The sound of thousands of voices singing this stripped down song sent chills down spines and brought up a sense of humility in the band.

Taking in the crowd’s singing, it became very clear during the performance of “Hourglass” that the band themselves are in awe of all they have accomplished this past year. Selling out the O2 Academy Brixton for two nights, performing to a total of ten thousand people, is saying alot considering this is a band that played in front of only five hundred in London last year.

Closing off the show with “Tyrants”, the last track off of The Balcony, the musical performance and overall theatrical production ended the night on a high. As a band that is not only talented when it comes to writing and composing music, it can’t be denied that they also know how to put on a show. There was not a down moment in the entire set and as “Tyrants” showed, Catfish and the Bottlemen are passionate about the music they have created and want each performance to be as authentic as it was presented on The Balcony.

With only one album out, it is clear that this is just the beginning for Catfish and the Bottlemen. Drawing in fans and onlookers by the thousands, the authenticity and presence they have brought to the alternative music scene over this past year has skyrocketed them in the music world far beyond their wildest dreams.