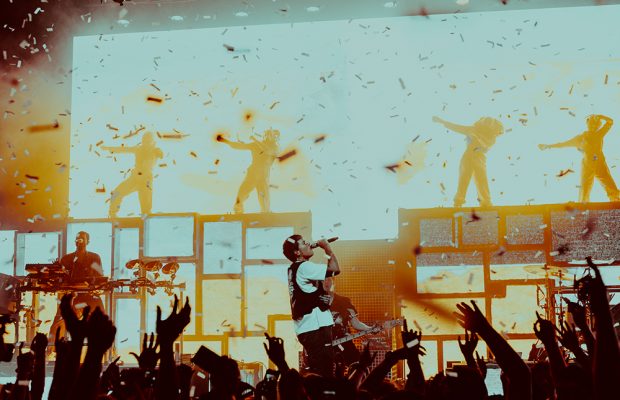 Bring Me The Horizon with Scarlxrd

Photos and Review by Bailee Logan

About five years ago I traveled to Columbus, OH to see the A Day To Remember on their Parks and Devastation tour with Motionless In White, Chiodos, and Bring Me The Horizon. This would be the last tour they ever opened on, as they went on to sell out Wembley Stadium a couple months later. Since then, they’ve released That’s The Spirit and more recently, Amo, which reached #1 on the UK charts, and also snagged a Grammy Nomination for lead single “Mantra”. They sell out stadium tours, they are headlining a festival with Architects later this month, they’ve played a full orchestra show at the Royal Albert Hall in London, had an artist appearance on the “Jimmy Fallon Show” and most importantly they played at the Old National Centre in Indianapolis, IN last week on their Second Base tour with Scarlxrd.

Scarlxrd came for a good time and knew how to work with the crowd–calling out for a mosh pit before the third song of his set, and never standing still for more than two seconds. That coupled with his angsty rap lyrics, screaming, and mosh call outs, the excitement was real. Bring Me The Horizon’s last tour stop here was 3 years ago, and the time before that was the 2013 Warped Tour stop. Indianapolis absolutely showed up for this show, and welcomed the tour package with big, open, midwest arms.

Bring Me The Horizon is literally that band. Their growth and innovation in their music has grown spectacularly over the the course of their music career. To think that the same band who released Count Your Blessings, a complete deathcore album, in 2006 would go on 5 albums later to release an arena rock/pop album with rapping, electronic pop, and still have massive guitar breakdowns 15 years later, and completely pull it off is incredible. Vocalist Oliver Sykes has grown more as a lyricist and frontman while expanding his vocal range from angsty screams and low growls to singing the softer jams like

‘Follow You”. Guitarist Lee Melia laid down the riffs while keyboardist Jordan Fish delivered the electronic beats and backup vocals, harmonizing with Sykes edgy voice, a combination that’s only perfected over the years.

I also appreciate how they can manage to play their poppiest song “Medicine” in the same set as “Diamonds Aren’t Forever”. Along with other hits such as “Shadow Moses”, which had boisterous results from the crowd, while adding new songs “Mother Tongue” and “Sugar, Honey, Ice & Tea”. Fans were singing back every song from old to new without skipping a beat. From their explosive production to their genre defying music, Bring Me The Horizon is poised to either become, or may already be one of the biggest bands in the world.