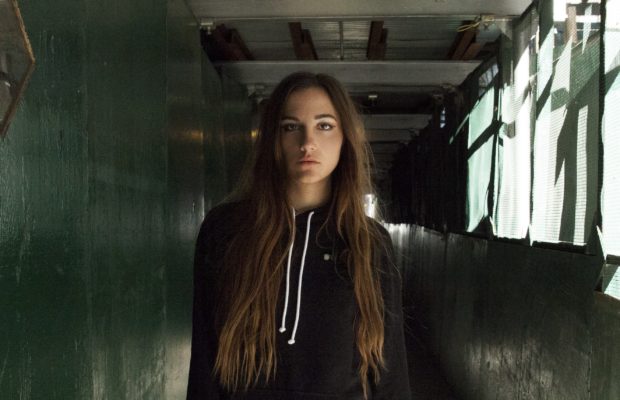 Kaity Dunstan, who goes by the stage name CLOVES, is a 21 year old Australian artist who has been gaining worldwide attention since the release of her EP XIII.  Having songs featured on the soundtrack to the 2016 film Me Before You, as well as an episode of Vampire Diaries, CLOVES is steadily making a name for herself in the industry.  She signed recently with Interscope records and will soon release her debut full-length album, which is being produced by Justin Parker and Rich Cooper, who have worked with such acts as Lana Del Rey, Sia and Mumford and Sons.  She also just released a video for her song California Numb, which will be featured on her upcoming album. She was also kind enough to answer some questions for me recently about touring with Michael Kiwanuka, her musical influences growing up and who she’s listening to right now.

Congratulations on playing your first US headlining show recently (NY Joe’s Pub) How was the show?

The show was great.

You recently toured with Michael Kiwanuka.  How did that tour come about? What was that experience like for you?

I’ve been a fan of Michael for a long time so it was defiantly an exciting tour for me. I love the idea of my live show being an experience so this tour also gave me the opportunity to experiment with how to translate my albums arrangements live.

What is the meaning behind the name CLOVES?

CLOVES had a nice ring to it and was a spontaneous name decision. Now I’m stuck with it…lol

Who were your musical influences growing up?  Have you found new inspirations as you’ve grown older?

I grew up idolising Nina Simone and Aretha franklin for their vocal tones and unique phrasing. I also loved Mazzy Star, Radiohead, Carole King and Fiona apple. I then discovered artists like Elliot smith and Massive attack.

Have you always wanted to pursue a career in music?  Did you grow up in a musical household?

My parents would always play records in the house growing up, some great choices and some terrible…so I guess you could say it was a musical household.

What kind of challenges have you faced as a woman in the music industry?

I guess being a woman in the music industry comes with a pressure to look and dress a certain way. I wouldn’t say it’s been a challenge, I believe in dressing for yourself and wearing whatever makes you feel good.

From where do you derive your inspiration when writing songs?

Just from personal experience, I really wanted this album to be blunt and honest with its lyrical context.

Have you found there to be any major differences between the music scene’s in Australia versus the US?

I’ve been out of the Australian live scene for a while, but I’m looking forward to coming back to play some shows soon!

Have you always known the direction you wanted to go in music, known the sound you were striving for?  I imagine it can be hard sometimes to find your identity as a musician.

I’ve always had an understanding for what kind of music I wanted to make but it’s taken time and experimentation to develop those ideas. There have been many frustrating days in the studio but I’ve learnt to follow my instincts.

You are currently recording your debut full-length album.  How has the recording process been going? What can your fans expect?  Do you have a favorite song on the album or one that holds special meaning for you?

The recording process has been long! But the record is finally feeling in a really good place. Sonically its blunt and masculine in its production and I’ve spent a lot of time working on the songs arrangements. Lyrically it’s a very brutally honest album.

Who are you listening to right now?  Do you have a favorite band/musician that you feel people should know about?

Right now, I’ve fallen back into listening to a lot of 90’s music, bands like The Verve and Mazzy star. Relatively new albums I would recommend are Michael Kiwanuka’s ‘Love and Hate’ and 6LACK’s ‘FREE’. I also really like Sharon Van Ettens last album ‘Are we there’ produced by Danger mouse, big fan of Danger Mouse…

Finishing touches on the album. I’m also thinking about getting a dog…

Make sure to check out California Numb here. Here’s what CLOVES had to say about the video!

“California Numb visually was important to me not to be too literal. The song is about a state of mind and I always loved simple videos that allow you to just focus on the artist without over writing the narrative or trying too hard to make something into a short film and falling short, right now that’s important to me to make something quite simplistic but hopefully, poignant to my mood of the song in its performance.”