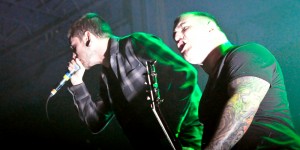 With the release of The Devil Wears Prada’s new album Dead Throne, they decided to do a North American tour, and by North American, that means that included the western cities in Canada too (and not just Toronto and Montreal). So of course when it was announced that they would be heading to Edmonton, many kids were stoked.

The turn out before the show definitely showed that. My friend and I headed towards the lineup when it hit 6:00, and it was easy to tell that the winter weather had already hit. The line was extremely long, and for anyone who’s been to West Edmonton Mall reading this, it reached from the Edmonton Events Centre door all the way to the TNT doors. I had a feeling it was going to be a crazy show, and I was 100% correct.

When we headed inside the venue was already booked. Shortly after For Today took the stage. It’s always such a blast seeing them live, they bring a lot of energy and really know how to get the crowd riled up.

Enter Shikari took the stage by storm next. Wether it’s an indoor or and outdoor show (like Warped Tour), they know how to get down! There’s always been that thing about Enter Shikari that made them stick out from every other band they could be compared to. Perhaps it’s their electronic component in their music, or that fact that they’ll blow your face off when they play live. With a wild set which included Rou Reynolds knocking down his keyboard and all the wires, they sure left a great impression on everyone there.

Next was Whitechapel. Although I’m not a very big fan of the band, they do know how to put on a big show. The crowd was already going wild by the time that they played and as soon as they hit the stage a flock of crowd surfers already flocked towards the barricade.

When the lights dimmed and The Devil Wears Prada was about to go on, a feeling of anticipation and excitement washed through me and I’m sure with a lot of the fans as well. They’re one of the most interesting bands to watch on stage, in my opinion, and they sound amazing live as well. They’re one of those bands who seem to sound ten times better live than on the album and that seems to be a hard thing to find now-a-days. Finishing off the night with a blast, they ended the night right.

Overall, the Dead Throne tour was amazing. Through the night there were fans going wild, climbing the columns in the venue, going crazy, and just in general being awesome people to attend a show with. But none of that would have been possible if it wasn’t for the presence and energy all the bands brought that night.