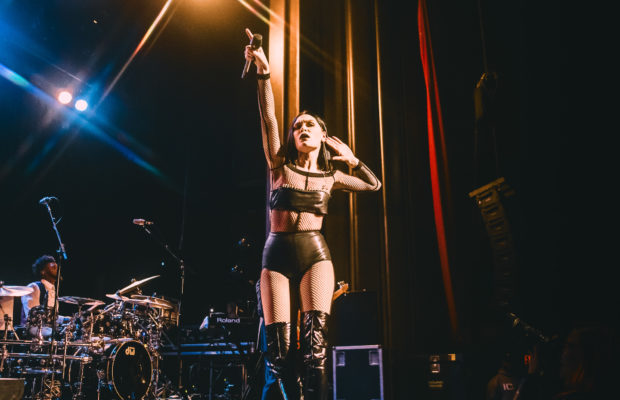 Starting off the night was singer and actress Kiana Ledé, with her absolutely stunning vocals. She immediately got the crowd grooving with her soulful voice and meaningful lyrics, making everyone in the room feel welcome. At one point she handed the vocals off to a member of the audience, who stunned everyone (including Kiana) with a voice just as amazing as the one on stage.

Next up was Ro James, who continued on with the night’s R&B mood as he moved around the stage proving with every note and lyrics that he belongs there. In an odd turn of events, James came out for another song minutes after finished his set, leaving the audience confused but ultimately delighted as they couldn’t seem to get enough of his talent or his charisma. The man has a stage presence like no other.

Finally, it was the moment that everyone had been waiting for. The lady herself, Jessie J, sauntered onto the stage to a roar from the crowd. She made it clear that it was her stage and it was where she belonged very quickly with the pure confidence that she radiates. It’s a confidence that seemed to empower every individual in the room.

Keeping with the nights theme of amazing vocal performances, Jessie belted her lyrics in perfect key and with so much emotion behind them. She had mentioned that her latest release, R.O.S.E. was written without the intention of being shared, which is evident in just how emotional and open her lyrics are. Despite having such emotional lyrics, she kept the evening fairly light with her dry sense of humour, cracking jokes (usually at herself) and sharing anecdotes throughout.

Including four different outfits over the course of one and a half hours, Jessie puts on an absolutely incredible show that had everyone laughing and crying (sometimes at the same time). This is definitely a show you should check out when it’s in your city, and you’ve got a good chance because she still has her full US run left, as well as a full run through the UK and Europe.