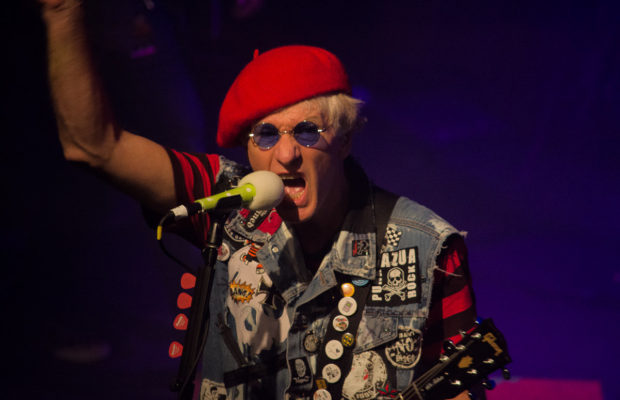 The legendary British punk band, The Damned, brought their 40th Anniversary Tour to Louisville, Ky on April the 24th.  It was Captain Sensible’s birthday and they were all having a lot of fun on stage, as well as with the crowd.  Dave Vanian looked sharp in his black slacks, black shirt, floor length black coat and sunglasses, while Captain Sensible had on black and red plaid pants, a denim vest covered in punk rock patches and buttons, a red beret and purple tinted round glasses.  Monty Oxymoron, with his wild curly hair and thick glasses, rocked the keyboard all night long!  They played many of their hit songs from throughout their long and successful career, including Alone Again, Love Song, New Rose and Disco Man, in which they placed an actual disco ball just behind the drum kit, creating a kaleidoscope of light that danced around the stage! They ended their set after a second encore with their anti-church hit Antipope.  The crowd was having a great time hearing all of their favorite songs, creating an incredible energy throughout the venue.  Having played together for 40 years, these guys can still rock! Los Angeles pop punk band Bleached and Louisville punk band Vice Tricks opened the show.