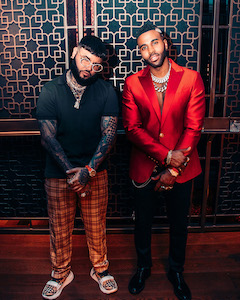 With over 130 million records sold worldwide, Jason Derulo is a multi-platinum powerhouse singer, songwriter, and entertainer whose most recent hit “Goodbye” with David Guetta ft. Nicki Minaj and Willy William has over 173 million streams on Spotify alone. Jason’s single “Colors,” the Coca-Cola Anthem for the 2018 FIFA World Cup, has over 221 million streams across all platforms. His breakout single “Whatcha Say” has now earned 5x platinum status while “Talk Dirty,” “Want To Want Me” and “Ridin’ Solo” [feat. 2 Chainz] have reached quadruple-platinum status. “Wiggle” [feat. Snoop Dogg] went triple-platinum, and “Trumpets” and “In My Head” earned double-platinum certifications. Platinum singles include “Marry Me,” “The Other Side,” “It Girl,” “Get Ugly” and “Don’t Wanna Go Home.”
Cumulative streams continue to soar, exceeding 15 billion overall and more than 5.7 billion YouTube views. At radio, his music has impacted a total audience of 22 billion-plus listeners with a staggering 4.4 billion spins. Jason was a featured performer for the Monday Night Football theme, is an investor in many enterprises, including Catch L.A. and Rumble Boxing with Sylvester Stallone and Ashton Kutcher, and he has a partnership with Warner Chappell Music with his publishing company, Future History.
Derulo recently unveiled his cinematic dance video for “Mamacita” feat. Farukko with the song debuting at #1 on the Billboard Latin Digital Song Sales Chart.  The music video was self-directed by Derulo and filmed in Miami and LA with Puerto Rican powerhouse Farukko and Emma Slater from ‘Dancing With The Stars’. “Videos are pieces of art and for this one, I really wanted to dive-in deep and roll up my sleeves and create a movie,” said Jason. “I honestly feel like there’s a lack of effort when it comes to performances and videos these days. From a director’s standpoint, these music videos are an extension to the song, so in my mind, I want you to be thinking of the video when you hear my song on the radio. I want these videos to have a lasting feel, so when you watch ‘Mamacita’ it’s not just a music video, but actually a short film.”   You can follow Derulo and stay up-to-date on all music, news and tour dates via the following links:
Website | Facebook | Instagram | Twitter | SoundCloud | Spotify | iTunes/Apple Music | YouTube | Deezer | Google Play